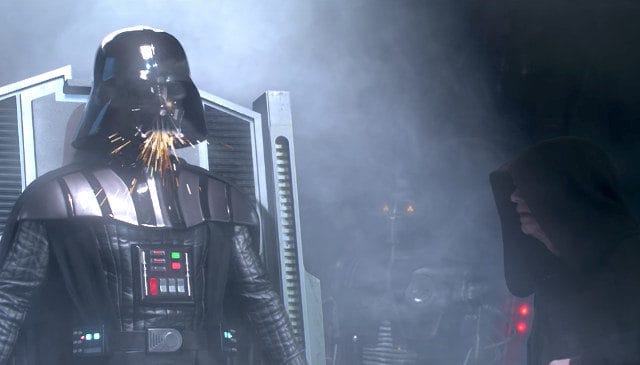 Oh my head. When that voice processor that channels the voice of James Earl Jones goes kaput Darth Vader sounds like a certain scared young man from Tattoine that just hated sand. Can you even imagine what might have happened if Anakin Skywalker’s body wasn’t ravaged beyond all repair on Mustafar? Sounding like Hayden Christensen for the rest of his existence as Darth Vader would have been, um, awkward.

I hate to throw shade at Star Wars, but someone really needed to give Christensen some acting lessons. He’d already been in a film or two before making his way over to Star Wars, but maybe if someone had actually been coaching him he could have done a little better. The way things happened people were glad to see him get transformed into Vader, a being whose voice was amplified and made to sound so much tougher than it had actually been in his life of before. That mask shorting out could have been the worst thing to happen to episode 3, and the way that some people talk about the prequel trilogy that’s really saying something.

None of Darth Vader’s lines would have been nearly as impressive if he’d had to speak in the voice of the guy that was actually behind the suit. James Earl Jones just as the kind of voice that commands respect and, when amplified, hits you like a velvet hammer, especially when he gets mad. Anakin Skywalker’s voice is by comparison kind of whiny and even a bit petulant at times, and really there’s no one that’s going to take him seriously when he tries to act tough. All Jones had to do was speak a few words and people were standing at attention because Darth Vader was making an announcement.

I kind of wonder if there ever was a disconnect of any sort between the actor and Jones during the making of the original movies. As in, I wonder if the actor turned the wrong way, kept walking when he was supposed to stop and talk to someone, or just missed the cue somehow. It seems like it would be hard to know this at times but at other moments it might be kind of obvious. I think however I remember hearing something about how the actor in the suit spoke the lines during filming and James Earl Jones’ voice was dubbed in later. Don’t quote me on that but I thought I’d heard something similar to it.

In any case the voice of Anakin Skywalker would not have been a good substitute for Darth Vader’s booming voice that could send shivers of ice running down a person’s spine at the first utterance. The guy was a villain for a reason. He wore an imposing black suit, helmet complete with facemask, he carried a lightsaber that could cut through almost anything, and he was just as ruthless as they came. In fact the movies didn’t even really do justice to how cruel he could be. In the books he was just one of the baddest men alive.

But the voice processor working once again when it’s time to take his mask off, that was priceless.