Home
Doctor Who
Darvill: Fingers Crossed to be 'Who' Regular 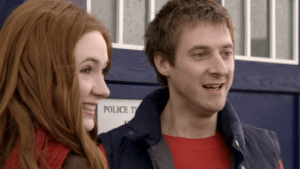 There’s been a burst of Doctor Who news today, but seeing as most of our readers are big genre fans, I don’t think many of you will be minding too much.

In any case, Arthur Darvill still isn’t confirmed as being a Doctor Who regular for series six, though the option is still open, he claims, and he’s keeping his fingers crossed. Darvill, who appeared in seven episodes of Who last year, was last seen taking off in the TARDIS with his new wife Amy Pond and the Doctor for a new adventure aboard the Orient Express… in space.

Darvill’s character, Rory Williams (or is it Pond?), certainly showed the most development of any character over the season, beginning as a slightly whiny nurse in “The Eleventh Hour,” and evolving into a genuinely enjoyable character. Unlike Mickey Smith, a companion with whom he has been compared, he’s shown little resentment toward the Doctor over the Doctor’s relationship with his girlfriend beyond a bit of subconscious competition between them in the episode “Amy’s Choice.” In fact, Rory gave his life for the Doctor in “Cold Blood,” though his death wasn’t his last appearance in the show. He popped up once again in “The Pandorica Opens” as a plastic Nesteen duplicate created from Amy’s memories, and waited alongside the Pandorica for 2,000 years while Amy healed inside in “The Big Bang.” He later wed Amy in the denouement of the series after being restored by the Big Bang Two.

Darvill recently told Doctor Who Magazine that he was hopeful to be a series regular next year. “Fingers crossed! If that does happen, then I’m really interested to know what happens to Rory and Amy’s relationship… there’s obviously been a big change to Rory after waiting 2,000 years!”

Doctor Who will return on Christmas day for a special before coming back next spring for a sixth series. We can only hope that Darvill’s name will be flashing through the time vortex alongside Smith and Gillan’s next time we see it.