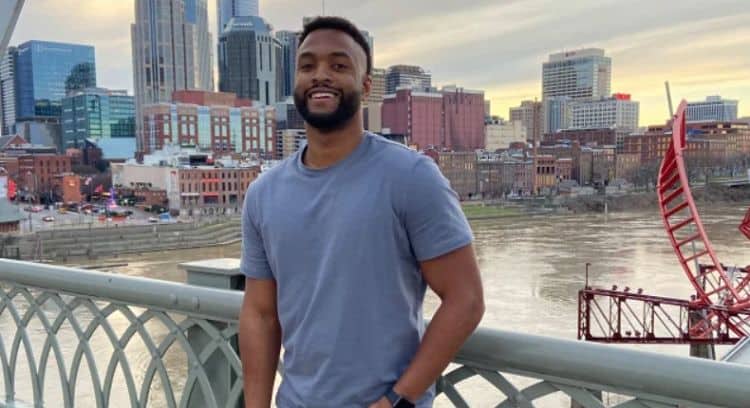 Summer is the season of love, and what we are really saying is that it’s the season “The Bachelorette,” airs and we get to see one woman looking for a man in a group of men who all try too hard to stand out. Katie Thurston is officially the woman of the hour, and she’s looking for love with some very interesting men, and Bachelor Nation wants to know more than what they saw on television the first night. One of the many, many men looking for love with Thurston is David Scott. He caught the eye of many women on the first night, and they’re itching to know more about him.

David Scott has a cool story. He’s a first-generation American. His parents were born and raised in Jamaica, and they later came to the United States. While they were here living and working and doing their thing, they welcomed their son. It’s a fun story, and it’s something he is inherently proud of in his life.

He’s not too young, but he is younger. Among the 34 men looking for love this season, he falls squarely into the younger crowd. The youngest is 25 and the oldest is 36, and he falls right into the bottom at the tender age of 27. He’s not the youngest, which we imagine works well for him, though.

3. He Works for Dell

He’s in the tech industry, and he enjoys what he does. He’s a Technical Product Specialist for Dell, which means he probably knows things about the products that they sell, how they work, and how to make them right when they’re not working correctly. Or maybe not. We are not in the tech industry.

4. He is a Tennessean

He was not born and raised in Tennessee, but he’s living there now. His job has him living and working in Nashville, which is a great city. He’s thriving there, as are so many people who call the area home. It’s filled with things to do, it’s open, the people there are living their best lives, and everyone is excited to visit when they have a chance.

He might be in Nashville now, but he was not always there. When his parents came to the states from the islands, they came to New York. They set down their roots there, and that is where they raised their son. He is familiar with the city, and it is where he will always feel right at home.

With many sports, especially the NBA, taking a hit in ratings right now, David Scott is still a fan. He’s a current fan of the Cleveland Cavaliers. He’s also a fan of Michael Jordan, who we can all agree is the GOAT. Even if you don’t like basketball – or you don’t like the Cavs – you cannot argue with the fact Michael Jordan is the best of the best.

Of course, he loves the 90s. Who doesn’t love the 90s? he was born in the 90s. Second only to growing up in the 80s, it was the best decade around. He got to grow up without social media and without a phone in his pocket making him easily accessible to the world at all hours of the day and night, and that is a real gift.

10. Pizza is Special to Scott

If we are being honest, we can say with authority that pizza is quite special to most of us. But, it’s exceptionally special to David Scott. Not just any pizza, of course. He’s a fan of New York pizza. For the rest of his life, he will take a bite of a good New York pizza and be taken home by the taste alone.