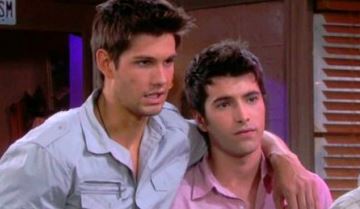 Days of Our Lives fans aren’t surprised at all that Sonny and Brady can’t keep their lives together. They will do whatever they can to keep their role in this business as they see fit, and it’s not going to bode well for either of them. They both want to take control over the business and make it their own, but this just isn’t working for either of them. They have to stop what they are thinking and look at things from a bigger perspective. They want to take over Titan, and they are constantly being asked to fight with one another.

Doesn’t it seem that they are always in a situation in which they are pitted against one another even though they should be working together for the greater good of the family? This is what is happening. Victor is behind this. He is using their desire to have the same role to get them to do whatever he wants them to do and to fight.

And they can’t see that. They just had another interaction with one another in which one or both of them was ready to really get physical with the other. It’s not a winning situation, but they can’t seem to figure that out for themselves. They are blinded, and they cannot even see what is going on right before their eyes. Will they eventually catch on to what Victor is up to, or will this continue the rest of their lives from now on?