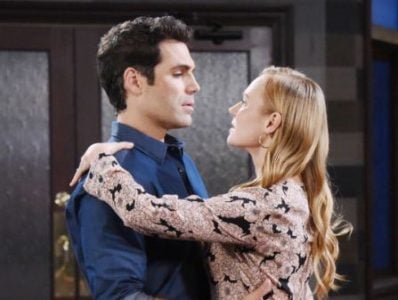 Days of Our Lives spoilers are great for the final day of this crazy week. Chad and Andre are working on a plan to take care of Deimos. They’re tired of him, and they are ready for him to be gone far away. They have a plan, but they have a few minor details to iron out. This is going to cause Chad to have a conversation with Gabi. She’s got some information about some photos of antiquities he’s trying to steal, and things are getting a little hectic because of it. He needs to know what she knows, but he always wants an opportunity to see her and be near here. We have a feeling Abby might find out about this and have some opinions on them spending any time together.

Chad and Andre are not the only duo on the lookout for Deimos’ and his stealing. They don’t know that Sonny and Paul are doing the same thing, and they might end up getting in one another’s way. It could end up being something that hurts them far more than it helps, which isn’t going to make anyone’s job easier. Perhaps they will get to work together on this one and bring him down for good. They aren’t exactly friends, but they can probably put their differences aside in the name of doing what’s right.

Kayla’s life is still in danger. Hal is going to take a medical syringe and try to kill her. She’s trying to save his life, and she’s done everything she can for him. He’s enraged, and he wants her to pay. Thankfully, Steve is no longer blindsided by the news he’s learning about the son he and Ava share. He’s going to show up at the hospital to talk to his wife, and he’s going to walk in on Hal with a syringe to her neck. Steve is strong and he’s protective, so he’ll be able to save her life and she’ll issue him a sedative. Things will get a little rocky for a moment, but Kayla will be just fine in the end.