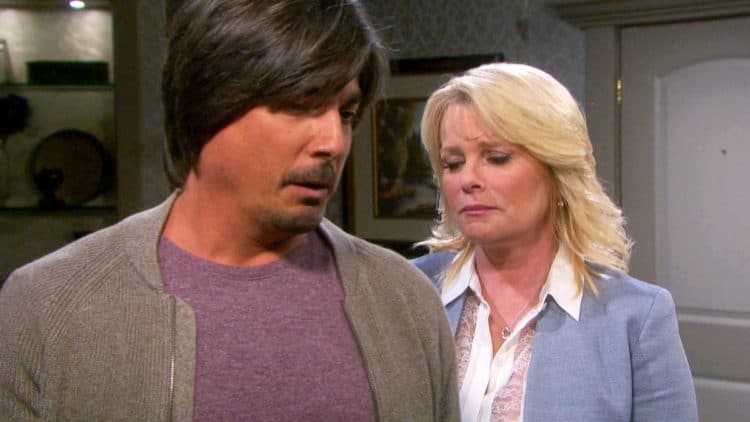 Days of Our Lives fans aren’t getting to see a lot going on in the way of new gossip by any means, but we have heard that fans enjoy getting as much news as possible when things are looking like this. We still have no news to share with fans as to when the show will begin filming again. What we do know is that there is hope that things will begin to return to some version of normal in the near future, but we don’t know what normal looks like. We know that filming occurs in California, and in LA at that, and that is a very democratic area of the country. It’s not a big secret that many Democrat-run states and communities are hesitant to open back up and allow residents and workers to get back to work and their lives, so we just don’t know when things will return to normal around here.

We do know that Days fans are a lot more fortunate than other fans right now, though, as they are at least able to see new episodes for a few more months. Up until this week, Days and General Hospital were the only shows that were airing new episodes since they had them to air. Unfortunately, General Hospital showed their own last new one on Thursday, and they are looking at repeat theme weeks from now on, too. For now, we are going to do what we can to keep you as close to the cast and crew as possible by sharing news and things that might pertain to the show as it is right now. This week, we want to bring you some news.

We all know that the lovely Adrienne was killed off last year, and it was a tragic situation. She’s gone, Justin is left on his own, but he’s fallen in love with Kayla. Unfortunately for him, things are not going that well now that Steve is back from prison and in her life again. Kayla will always belong to Steve. It’s just how it works for them. They are not going to ever find that this is not their lives, but they are going to find that her feelings for Justin won’t just turn off.

We have, however, been hearing some rumors that the lovely Adrienne is coming back from the dead. Actress Judi Evans is set to return to the show at some point, according to those rumors and sources close to the show, and that’s made it all ab it easier for us to see Justin feeling so sad. To lose two women in the same year? That’s hard considering how much we like him and what a good guy he’s always been. But, we have some bad news.

It appears that things are not looking good in Judi Evans’ life right now after a horrific accident on May 16. She was out riding her horse around some trails when the unthinkable happened. According to sources, she was being followed by some men — we don’t know who or their intentions or why — when her horse began to get spooked. She took him down a new path hoping it would calm him down, but it did not. He began to act spooked again, took off, and she was thrown from the horse.

According to news reports, the fall resulted in her breaking her collarbone, a number of ribs, and suffering from a collapsed lung. We don’t know what happened to the men who were following her, but a group of other riders found her still conscious and called for help. She’s currently in the hospital recovering from her non life-threatening injuries, thank goodness. She will have a long road ahead of her in terms of her recovery, but she’s all right, she’s safe, and she’s going to be fine. We have no news on her horse and whether he is all right or not, and we don’t know anything else about the men who were clearly up to no good when they followed her and her horse. We cannot speculate as to what they were doing, but it seems like bad news.