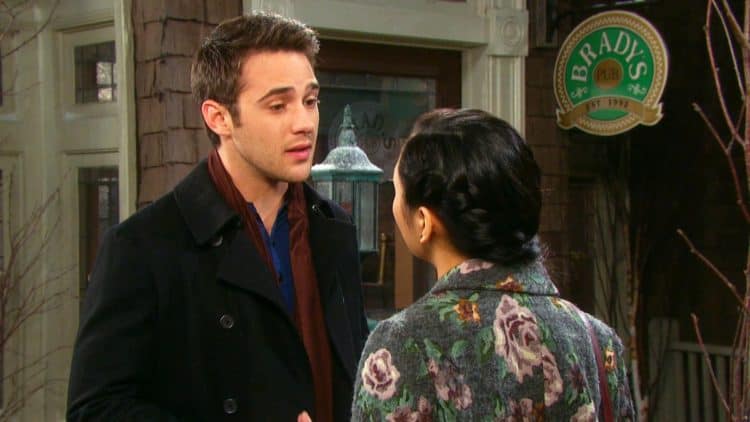 Days of Our Lives fans love a good friendship, but itâ€™s even more special when that friendship stems froms a failed relationship. Or perhaps we like the friendships that turn into relationships â€“ even if they donâ€™t work â€“ and they realize they are much better off as friends and their failed attempts donâ€™t get in their way. We have to love that because zero people are living their lives around here with exceptionally successful relationships behind them. Salem is not the place where love abounds and forever is peachy and happy. But, it is a place where some good friendships are born, and we appreciate that. Over the years, weâ€™ve looked back and loved a few failed relationships more so when they become successful friendships. And where we are.

They tried so hard to make things work, but we knew it would never happen. For one, theyâ€™ve been friends entirely too long. We get why they thought this might work out. He was sad and crushed when he caused the love of his life to lose the love of her life, and they didnâ€™t have a chance in life because he was a drunk driver who killed a friend. She lost the man of her own dreams, and she was not happy about that, either. Her entire life was ruined as a result, and she was lonely. Their friendship was a good one, but they both eventually fell to pieces and couldnâ€™t overtake their feelings with sanity anymore. They got into things they did not need to get into. They made poor choices. They allowed their depression and their lack of hope get them both a place in which they thought they were going to make it work, but you cannot make life work when there is nothing but sadness and misfortune going on. We hoped they could pull it together, right their lives, and find some happiness with one another, but it quickly became apparent to us this would never happen. We prefer their friendship to their sad, stale romance.

They sometimes hook up for fun, and we typically do not have a problem with that. They are excellent at realizing they can do this without any commitments or anything else, so we donâ€™t disagree with their desire to do this. But, we did not like them when they tried to be official and together. You see, sheâ€™s a little bit of a mess and heâ€™s a really good person. He does all the right things because he took an oath to serve and protect, and that is what he does. Heâ€™s in the know, and heâ€™s good at what he does. But, they tried. It didnâ€™t work. Heâ€™s living his life in line with the law, and sheâ€™s more of a sometimes the law is inconvenient kind of woman. That didnâ€™t work, and they didnâ€™t work, but we do like that they are friends, and that they can look past that failed attempt and still have such a fondness for one another.

They are always off and on and trying to make it work, but they are much better friends and they both logically know that. Since neither of them is always logical, however, we can see how they always end up in a dark spot with one another. You see, they sometimes find themselves in a place they donâ€™t need to be when they are both hurting. They love one another, but she really loves Eric â€“ and so does Brady. So, they try to keep their situation to themselves, they try to put it behind them, and they try to figure it out to the best of their abilities. They are certain they have no future, but thatâ€™s only because of Eric. When heâ€™s not in the picture, Brady becomes her next best thing in life. That is hard on everyone, and we can see how thatâ€™s happening in their lives. Itâ€™s a bit much, but it is what it is and thatâ€™s all we can say about them. Theyâ€™re better as friends, but they donâ€™t always think that through until itâ€™s a bit too late in their own lives.