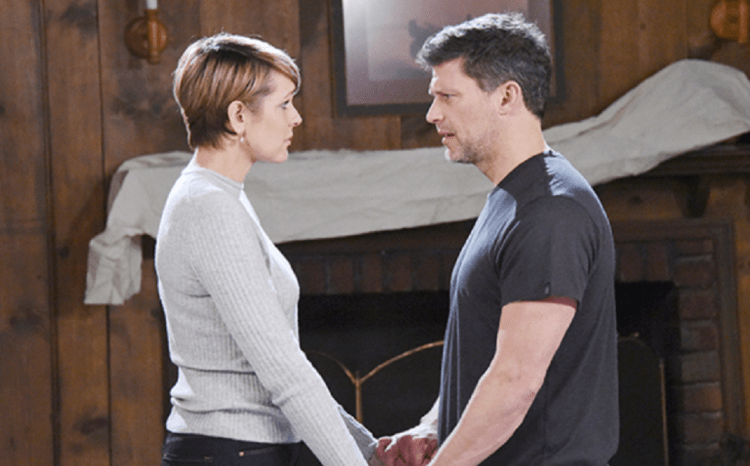 Days of Our Lives fans know a thing or two about chemistry, and we love it. But, we also worry about it from time to time. You see, there are so many people who have a relationship that they want to see grow, that they want to see make more sense, and that they want to be invested in, but it’s hard for people to find the time to find the love and commitment they want when they don’t have any chemistry. No one feels that true love is real if there’s none of that; and we agree. So, we thought we might take a moment and update you on some of the couples we feel have the most horrible lack of chemistry. We’ve talked about it before, but our lists change — and we think you’ll agree.

She seems like a sweet girl, but she didn’t have anything to offer Rex. Clearly, considering he was the kind of man who took off and made a life of his own in the second that they had a break from one another. Did anyone else get any Ross and Rachel vibes there? Did anyone else feel like they had a fight, broke up, and he went off and slept with someone else but he just had the gross misfortune to get her pregnant in the meantime? We felt that, but there is nothing else that we can feel between them. Her making the choice to leave him and move on was the best choice she’s had in a long time, and that’s all there is to it. We cannot handle things going another direction here, and that’s where this is. He’s gone, but she’s also losing Eric again. But, if we are being honest, they may have had a bit more chemistry than she did with Rex, but barely. Eric is a man who is clearly spoken for, and we are not mad about that at all. He’s got Nicole to worry about, and we are good with not seeing him with anyone else in the meantime. They won’t work, but there’s always Xander for her if she chooses.

When you bring a man back from the dead with the help of a rogue doctor who makes his living doing some pretty illegal things, you don’t really expect a lot in terms of chemistry and romance. When Eve brought the thought-dead Jack back to town, you could see the chemistry between he and Jenn, but you didn’t see anything with Eve. Of course, she owns him, tells him how to feel and what to think, and that’s all there is to it for him. He’s not someone who did anything other than what she said to do, and it was obvious to us. We knew this was going nowhere, of course. They didn’t have anything that it took, and there was no passion here. In fact, we didn’t even see respect, likeness, or anything that resembled anything kind or loving or sweet, if we are being totally honest. They lacked all of it, and that’s what we found with them.

Okay, okay; so, they are not there right now, but this is not the problem. The problem is that we did think they might have something to offer one another, but that did not work out. You see, they ended up with nothing to show for their time and commitment and effort with one another. She was desperate to find someone to love, and she fell hard for him. The problem is that it was obvious to us from the start that she was entirely too into him compared to how he was feeling about here. There’s not much we can do about that, of course, but we often wonder if we can change the way the game is played outside of that realm. We know that they didn’t have the most to offer one another. She was more into him than he was into her, and we could see it from the start. We knew they’d never amount to much more than they were when they met and hardly knew one another.