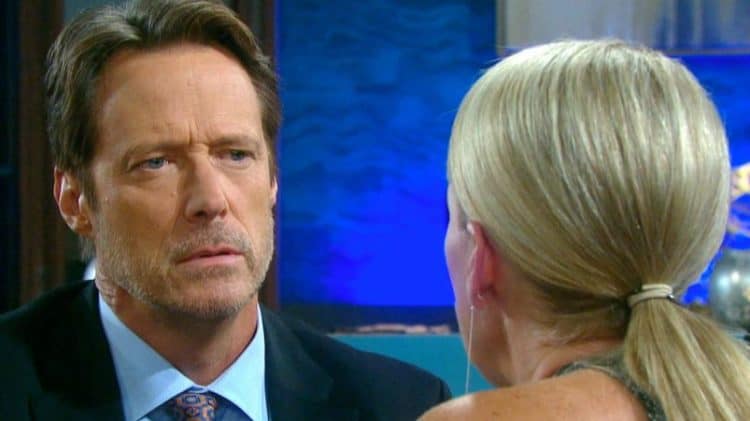 Days of Our Lives fans aren’t surprised that Leo asked Xander what he asked him. There is literally nothing that shocks or surprises us more than the fact that this man is slimy and disgusting in every way, shape, and form. But will Xander really consider it? We definitely do not put it past him, but we to think that there is a great chance that this is a man who has to do things his own way to get what he wants most in the world. And let’s be honest. What he wants most in the world is to get into the head of the family business and to the front of the line in Victor’s eyes. So, there is a small chance he will not be on board with this. If he thinks that it will ruin his chances to get ahead in the family in the eyes of Victor, he will not do it.

But, what does that mean for Will and Sonny? Will has asked John to help him find Leo’s mother, which might just be one of those things that really does work for him in a good way, or one of those things that completely falls apart and makes them all feel like there is nothing else they can do in life. We have no actual idea how much this will change their live sand their futures, but we do think that they will have a chance to get something accomplished this way. Even if she just feels so disappointed in her son that she shows up and tells him – that would be all it took. But we can assume that Leo will make everything crazy for as long as he can sit here and make things work his way while they all suffer.

It's going to be a HOT winter. 😏🔥 #DAYS pic.twitter.com/XptWyYihfx

Well, there is something to be said for the fact that there is so much hotness and so many things going on right now, and we seem to like every second of it. Let’s let this continue in a manner that works.

Relationships are heating up in Salem this winter. Watch #DAYS, weekdays on NBC. pic.twitter.com/ugatVG3VwF

Things are taking a terrible turn for the worst for Eric as he makes a poor decision. His life has been largely, to this point, dictated by Nicole. She is the clear love of his life and the woman who he was planning on spending his life with, and she’s gone. All because Xander forced her to marry him and that didn’t work out well for her. Things didn’t go according to her plan, and her life has been a mess of things that just don’t work out in his favor, and he’s going to make sure he lets Xander know how he feels after this. He’s going to attack Xander, which we all know will not end well for him. Not only is Xander a horrible man, he is not a weak man. He will not take this lying down and without a plan for revenge.

We don’t know the details of what will happen, but we must assume someone else will be there to help make sure that things don’t go too far outside the mark in terms of what is going on. We have to assume that things will work for them in some way, but what will that mean for everyone else? What will this mean for his relationship with Sarah as it continues to grow, and what will it mean for Victor when he finds out Xander was in the middle of this entire mess? He won’t love that, and that will not bode well for his future with the family company. It’s all a mess.