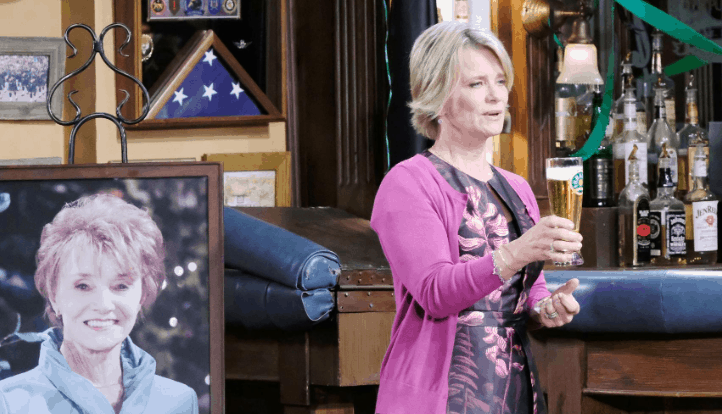 Days of Our Lives fans know that Kate is someone who doesn’t like to get into any else’s business, except that’s precisely what she loves and how she rolls. She loves to be in the middle of anything and everything that is not her business, and we are not sure she will ever get over that and what it means for her. But, she’s got some stuff on her mind. She’s in the middle of focusing on things that might make a big difference in her life if she allows them, but she’s mostly just overhearing things that are none of her business. She will, though, make them her business. She’s got a lot on her own plate, and she’s a woman who has a lot to offer when she’s on your side. But, the conversation she overheard is nothing that will prove easy or good for her. Interesting, yes, but not easy or good.

Then there is Eric, who has agreed to do something he is not sure he wants to do. He’s had feelings for Sarah for a while now, and he’s been begging her not to marry Rex. But, Rex wants to get married yesterday, and they’ve asked Eric to do the marrying for them. Why? W cannot figure that one out, but we really cannot figure out what he was thinking when he agreed to do it. He decided it was something he wanted to do, that he would be good at, and that he would make his own. And, we are not entirely sure about that. At the moment, though, we do know that they have something else to offer, and that something else has a lot to do with the things going on outside of their impending marriage and Eric’s current set of heartbreak.

This #PrideMonth, @ChandlerMassey reflects on Will's place as an LGBT character in Daytime. @MrRobertScott and @victoriakonefal also comment on the plan to expose Claire. #DAYS

Don't miss the latest episode of Inside Salem! https://t.co/9vlZu6fkQB pic.twitter.com/cBQfgGe2Qg

This should be an interesting discussion about such a wonderful character.

Kate is in the middle of a trouble storm, and she has to find a way out. She’s got some life problems that she’s not sure who she can go to with, and that’s because she has no idea who she can and cannot trust anymore. She heard something, and everyone is in trouble. For one, Abe is doing damage control with Nicole and Stefan, but he has no idea what is really going on around here. They’ve gotten themselves into the middle of a problem, and he is trying to handle it without knowing what is really going on in their lives. Then, there is what is going on with Lani. She’s made it her mission to try and work things out with Eli. She loves him, and she’s trying to fix the problems she’s caused.

He, however, is not sure that he is ready for the kind of drama that she has to bring to the table. She has too much hurt in her heart, and she’s too much involved in things that didn’t work for him. But, she might be able to salvage what is left of this relationship if she puts her mind to it and does what she can to make it possible. Of course, there is also the situation in which we know Jack has some questions. He wants to know what Kayla thinks about what happened with Rolf’s formula, and she might just have the answers he is looking for. But, will he take it, and what will happen if he does?