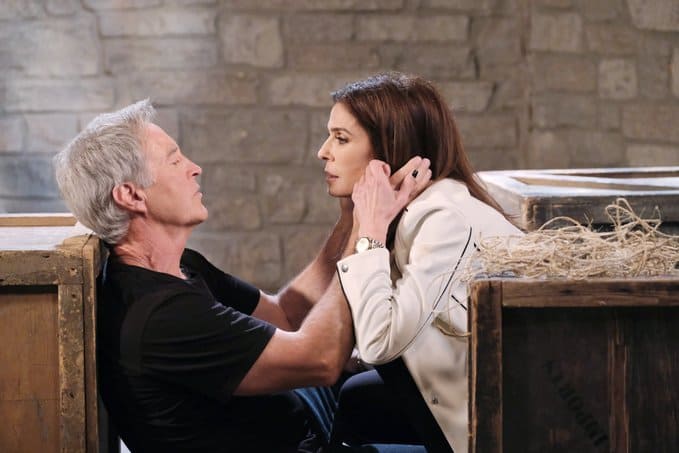 Days of Our Lives fans just wonder if the decisions that Ciara is making are the best ones for Ben. He’s broken out of prison along with Clyde, and he’s on the run from the law. We know that he did not do what they are accusing him of doing, and we also know that he cannot be captured again because this time he will really be in some big trouble. For now, she has to keep him hidden, but we think that she’s making some risky choices. For one, they know tha he is with her so that means the police will be all over her. All it will take is one small mistake for them to be in a situation that leaves them in a bad place. The gatehouse at the DiMera mansion might not be the best place for him to hide out with all that history, either.

Steve found the help he was looking for from Kayla, but she still has no idea that she’s not dealing with the man she was married to for so long. Things are going to take a very ugly, very dangerous turn before much longer when they all realize that this is not what it seems at this point. They have so much going for them, but they have to figure it all out, too. For now, though, Kristin is a woman with a secret, and she is not in a place to share that with the man who needs to know. She and Brady have done some serious bonding lately, but she’s not going to find him happy when he finds out her secret. She knows this. This is not good news for her. But, then there is Sarah, who has learned more about her baby’s problem, and it’s not good.

In the latest #DAYS, Clyde and Ben’s escape from prison doesn’t go as planned….https://t.co/ZsCmioRrzb pic.twitter.com/Cd96XXJuWC

It's Valentine's week, and Eli and Gabi are tying the knot while Ben is making his escape. Watch #DAYS, weekdays on @NBC. pic.twitter.com/MJir9ilUTB

Kayla is a woman with a brain. She’s smart. She’s intelligent. She’s wise. She’s also not really sure what is going on right now. She’s so insanely happy to see her husband out of the prison he was meant to be in for the rest of her life that she is doing nothing but ignoring the signs that there is something off. Her husband, Steve, is a man who is kind and patient and giving — especially with her and the people she loves the most. This is not a man who has those personality traits, because this is not her husband. But, she’s not seeing it, and fake Steve is going to continue to deceive her and all that she stands for. This is bad news, but what else can we do about it?

On the other side of this one, we have to focus on the fact that we also know there is a problem with Shawn. He’s going to ask Princess Gina to hear him out, and this is his way of trying to get through to his mother. He knows she’s in there, and he has to do something that will make this situation better. Until she is herself again, there is no hope that this plan will ever fall apart and they will ever save the lives of everyone in the process. It’s an ugly thing, but it will happen. Gabi is going to try and make sure she’s the one in control of Julie’s heart, but she’s finding it hard, and this is why she’s meeting with a shady character called Chris.