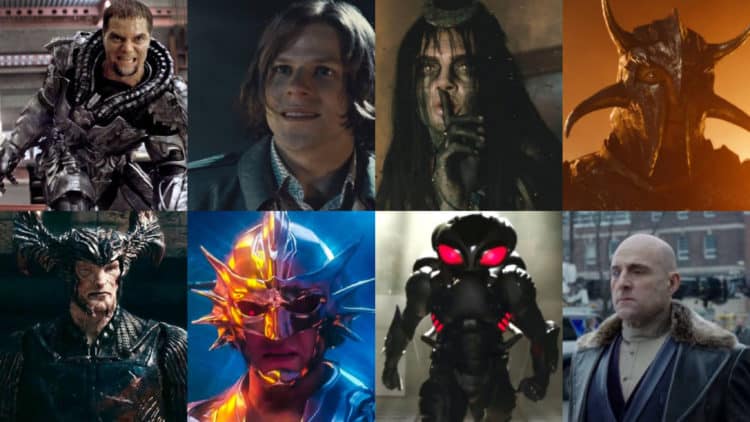 Some of these DCEU villains you might not have forgotten about that easily, but with the effort to push forward and stop modeling their own movies after the MCU’s fame it’s bound to happen that some things are going to be forgotten since the DCEU was, in its way, kind of a failed experiment that might get new life breathed into it eventually, but not for some time most likely. That being the case it might escape the notice of many that some of the villains that we thought were either dead or well and gone are still there and just waiting for an opportunity to make their way back and become a bother to the heroes yet again. Some of them might take a while and others might just be biding their time until they find the right pressure point to hit when it comes to striking at their enemies. But quite a few villains from the DCEU are still alive and kicking and could be used in a number of ways that could bedevil the heroes and make life a very difficult prospect. If and how they’ll be used in the future is hard to say since a lot of them have been defeated and have suffered some very serious setbacks. I’ll tell you right now that Lex Luthor is not on this list since he’s the kind of guy that, despite his human limitations, is not bound to stay down if he’s still breathing. As for the others, well, there’s definitely still potential.

Here are five villains from the DCEU that you might have started to forget were still alive.

Watching Aquaman dispatch Black Manta in the movie might raise an argument since it could be that a lot of people don’t want to think that anyone could survive that kind of impact and then a dip in the ocean while possibly unconscious. But this is a comic book movie to be certain, and death is never really a sure thing. Considering that Black Manta has been around the Aquaman comics for a while it does sound kind of awkward to think that a movie would be killing off one of its best villains right off the bat. Likely as not it will take some explaining if he does come back, but let’s not rule Black Manta out just yet.

This one is bound to get the arguments flowing since the term ‘Godkiller’ that Wonder Woman was given would be kind of diminished if she actually failed to kill Ares as it appeared in the movie. But then his role as an old god would be greatly diminished as well if he was able to be taken out so easily. So in a sense it becomes an argument over whether Ares is being de-powered or if Diana is being told that ‘you’re powerful, but not OLD GOD powerful‘. Given that there’s a belief that the old gods draw power from the belief and practices of human beings, it’s hard to see Ares being gone altogether since conflict is a pretty standard habit of a lot of human beings, and using that line of thinking it’s easy to think that Ares could come back after laying low for a while.

Being locked away at the end of Shazam! it’s obvious that Savana is still alive, but whether he’ll be used again is hard to say, so it’s easy to think that he might just be forgotten after a while, which is almost as good as being dead. He’s still alive and kicking however and could be used in another plot point here or there as he’s needed, though he’ll likely stay with the Shazam story line if he does get used again, since without the deadly sins he’s kind of hard to plug in without giving him a benefactor that will first spring him and then make use of him.

It definitely looked as though the parademons were doing their best to take him out after it was revealed that he was afraid, but given their status and their lack of power (they could be handled by Batman for crying out loud) the parademons just wouldn’t have the necessary punch to put him down. He was defeated obviously, but given the fact that he felt way too de-powered and that a lot of these movies appear to be going through the motions instead of really pitting the heroes and villains against each other in a no holds barred death match, it’s not too surprising that the writers gave him leave to run so he could fight another day.

This one is kind of obvious since Arthur spared Orm at the end of the movie. But there’s nothing to say that Atlantean law wouldn’t punish him pretty severely, or that he wouldn’t try to escape. If anything Orm became a footnote that might just disappear unless the sequel has use for him. But as far as still being alive it’s more of a statement about how his character was handled near the end, and how he was downplayed quite a bit, especially since he was the main antagonist.

I can’t wait to hear the arguments for this one.