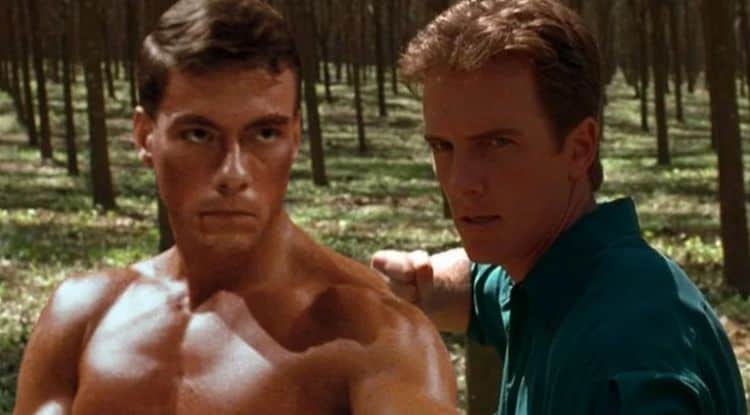 Considering that Johnny Cage was based on Jean-Claude Van Damme it’s pretty fitting that this Deepfake of Mortal Kombat was created using JCVD’s face. No offense to Linden Ashby, who played the role quite well, but JCVD was supposed to be the original Cage since the video game novel was based on JVCD’s appearance in Bloodsport. But unfortunately, van Damme was tied up playing Colonel Guile in the Streetfighter movie was actually much worse than Mortal Kombat, so Ashby was the go-to guy. The Deepfake shows that the effect probably would have been about the same, but obviously van Damme’s accent would have been just as confusing as it was in Streetfighter since it’s simply too hard to hide even today. But it would have been fitting to put van Damme in the role if only because a lot of people used to accuse him of being a fake, which is the same kind of derision that Cage is faced with as an action star in the game. What’s really amusing is that there are still people that figure that JCVD is a fake, which is untrue since the guy has gone through the training and does have a fighting record that’s fairly impressive. It’s fair to say that he gave up that life to become a movie star, but the kind of stuff he can do on screen is still impressive and it’s obvious that he keeps up with his training at least enough to keep working and remain as impressive as ever. The downside of his career is that he’s worked mainly on movies that have gone straight to DVD or streaming in recent years, but he has been seen in a few movies such as The Expendables 2 and a couple of others that have been a little more prominent, such as the rebooted Kickboxer movies.

But there’s no doubt that had it been possible that a lot of people might have been happy to see JCVD as Johnny Cage in the 95 version of MK. It’s even possible he might have returned for Annihilation, but had the part still been cut down so much it wouldn’t have been worth his time, much as it wasn’t worth Linden Ashby’s. The fact that Shao Khan killed off Cage early in the second movie was kind of a detractor from the overall story since there was absolutely no point to it. After being treated as the comic relief for so long it’s kind of hard to think that Johnny is getting so little respect considering that he’s one of the founding characters of the game and on top of that, ends up being someone that’s descended from warriors that were trained for a specific purpose. The intense focus on other characters that have come and gone through the years, some of which are beyond ridiculous, has been kind of frustrating since, despite his cocky and arrogant attitude, Johnny Cage has still been one of the best characters in the franchise, though he is a hard character to master in the game.

The fact that Cage didn’t show up in the most recent version of MK irked a lot of fans since the whole idea of bringing in a new character that was untested and in some cases isn’t really that effective was a head-scratcher to be certain. The descendant of Scorpion, Cole is still not the most insane character to ever be created, but a lot of fans were hoping to see characters that actually belonged to the game from years past, not some brand new face that had never been seen before. In fact, if not for the arcana that was created for the most recent movie, it’s likely that Cole would have been killed fairly quickly and wouldn’t have been able to free his ancestor from the Netherrealm. Had Johnny been placed in the movie it’s easy to assume that he would already bear a mark and that his arcana would have come fairly quick simply because he’s Johnny Cage and there’s nothing to indicate that it would have been any different. But with the idea of a sequel coming it’s very easy to see that Cage will be involved at some point, and his arcana since it’s likely that the movies will stick with this, will be something that makes him even deadlier. Who will get to play the role of Cage is hard to say since one name does come to mind and it’s not JCVD, but instead The Miz from the WWE that a lot of people want to see. Some want to see Ryan Reynolds as well, but the thing is that the Cage that is to show up in the sequel has to be a bit younger, so it’s easier to think about The Miz simply because he has a slightly more youthful look. JCVD would have been great in the role a couple of decades ago, but as of now, he’s definitely aged out.