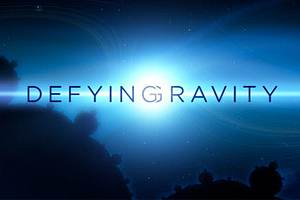 It seems that ABC might be just as confused about the future of Defying Gravity as the rest of us are. Yesterday TVOvermind reported that Defying Gravity had been canceled. Although no official announcement from ABC had been made, it seemed clear by ABC’s actions, and the show’s ratings, on what had happened, and many other sites also reported the cancelation (we did mention that nothing official had been announced, by the way). After publishing our article I personally attempted to get in touch with the show’s publicist at ABC for a confirmation and some answers to our questions. While I didn’t receive a response, it seems that The Futon Critic did, as they posted the below news article this evening.

Nicole Marostica, the show’s publicist for the network, has confirmed the Alphabet hasn’t pulled the plug on the show and is still mulling scheduling options going forward.

Due to its late start this summer, ABC didn’t have the real estate to air all 13 installments from its first season. “Gravity’s” shortened run was made clear from the start: the network announced back on July 22 (read the story), “Brothers & Sisters” would return to its Sunday, 10:00/9:00c slot on September 27, leaving “Gravity” just eight weeks of potential air dates.

This coming Sunday, ABC will air the 2005 feature “King Kong” rather than put originals against CBS’s coverage of the Emmys.

“Gravity” nevertheless has been a lackluster performer at best – last night’s airing drew just 2.52 million viewers (including a 0.9 rating among adults 18-49), making it the least-watched program on the four major networks.

No indication was given as to when the show will return.

So let me get this straight…ABC pulled Defying Gravity from its schedule a week early, gave no previews for the next episode, and didn’t think they should send out a press release explaining to fans of the show what was happening? How did they ever plan to get their audience back if they allow the show to mysteriously disappear with some future non-committal return date not even mentioned to anyone, anywhere? So they say it hasn’t been canceled, but they don’t have the slightest bit of a plan for when or how to air the remain five episodes of a show that’s only pulling in 2.5 million viewers? Why is ABC being so damned passive aggressive with this show?

Before I say what I’m about to say, I just want to be clear that I love this show. But don’t jerk our chains ABC. Don’t hope that this is going to disappear in the mist that is the fall season, and that none of us are going to remember this show in a few months. Either have the guts to cancel this fantastic show and face us, or give us a plan of when we’ll get to see the remaining episodes.

Yesterday I said that a Save Defying Gravity campaign was out of the question, but I think I might be having a change of heart. Anyone up for showing ABC that we love this show and want it back? Sound off in the comments and let us know what you think about saving this show. The most successful campaigns have been the ones where fans actually mail or buy something significant from the series to the executive staff at the networks. So what are you willing to do?