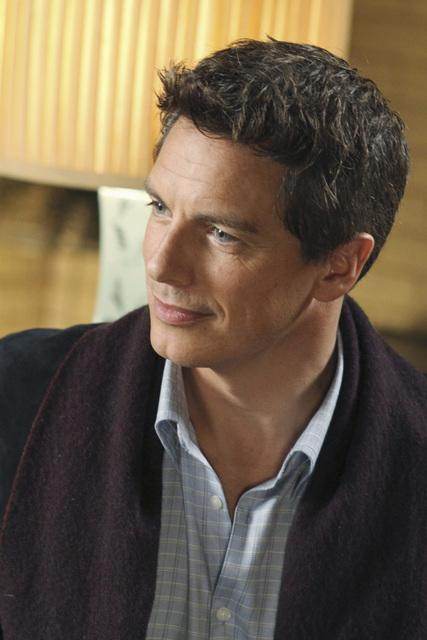 As we get closer to the end of the season, the danger heads to Wisteria Lane faster than a speeding locomotive, but only for a select few on Wisteria Lane. But again, who will be laying in it’s path when it hits?

Bree is determined to welcome Sam Allen into the family, because by God, he’s a Van Der Kamp and will be treated as such. Clearly, Andrew didn’t get the memo, because he is not kosher with his new bro. Bree throws a dinner for Sam Allen that consists of Orson, Andrew and Danielle, who likes her new brother. But when Bree mentions that Rex played the guitar, Sam shows off his own skills using Rex’s old guitar, which Bree wants to bestow to Sam as a gift. Of course Andrew gets upset and demands to keep the guitar. When that wish isn’t met, he smashes the thing in front of everyone.

Bree sits with Sam later looking over photos of Rex and she realizes that she doesn’t get to talk about Rex that much since she married Orson. This revelation makes her realize how much she missed her deceased husband. Sam, being creepy as ever, says that she can talk to him about Rex anytime she wants. Orson, who has been mostly on the sideline on this issue, has incentive now to throw his hat in. He approaches Andrew about seeing what Sam is really up to, because he is getting dangerously close to Bree. Andrew and Orson teaming up to scheme? The Gates of Hell has just opened…

Remember when Juanita was bullying M.J. last season and Susan and Gaby fought in the yard because of it? How about the smartest kid incident earlier this season? Well last night was Round Three: The Candy Wars

When MJ worries about losing a competition to sale the most candy bars at school, Susan vows to help her son achieve his victory, because he sucks in everything else. But she is met with opposition in Juanita and Gaby who are peddling candy bars like a dope dealer dealing crack. Susan and Gaby eventually lock horns and take drastic measures (bribing old college roommates, faking illness, using their assets [Gaby], ‘kidnapping’ each others kids, etc) to achieve their goals. In the end, it is Susan who initiates a truce after hearing from Juanita why she is campaigning so hard to win the competition. Juanita is worried that Gaby thinks she is a loser cause she can’t make any friends or can’t keep any. I am going with the latter. Susan teaches the MJ the art of winning without winning, which helps Juanita win the competition by the Delfinos donating 40 bars to Juanita’s cause. I love the storylines between Susan and Gaby when it comes to their kids.

Lynette vs. The Russian Bombshell

Lynette and Tom are shocked when Preston breaks their rule of sleeping with Irina under their house. So Preston comes up with a better plan: he and Irina will get an apartment. Tom is livid, but Lynette cheers them on and later reminds Tom of how they were 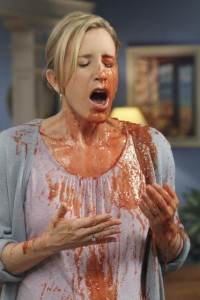 at each others throats when they first got their own apartment. Ingenious plan right? But Preston, who is quickly becoming the most self destructive kid in the world, throws another monkey wrench into Lynette and Tom’s upbringing by claiming that to pay for his and Irina’s apartment he will use his college savings and get a job as a gutter at a meat factory. See a college education would’ve probably lead Preston to reading Upton Sinclair’s The Jungle and not making short term decisions to fix long term situations. But Preston is dumb and is being smothered by fake boobs and crap across his lip. But, again I digress…

Lynette has a fit and declares that Preston is ruining his life over a girl he has not clue about. Words are said and Irina throws a pot of dinner on Lynette. All I can say is if Lynette had not of been pregnant or any other woman, Irina would have had a well whooped ass.

Later, Lynette is cleaning the mess and when Irina shows up to talk, she tells the Russian Bombshell that she will fight her to the death. Irina says bring it, because she just upped their wedding to next week to help clear Preston’s mind on which Mrs. Scavo he should be listening to. I want to bust those inflatable things she calls breasts cause I hate the trick that much.

Katherine vs. The Closet

Wisteria Lane’s newest couple are enjoying an afternoon delight, which quickly turns sour when Katherine asks Robin to not make it seem as if they are a couple when they attend Karen McCluskey’s cancer free party. Robin is thrown off and wants to know what the deal is, which Katherine simply says is that she doesn’t want everyone in her business. Robin agrees, but rather reluctantly. They attend the party and as soon as they get there, Tom introduces Katherine to an admirer. As the guy flirts heavily with Katherine, Robin gets angry and pulls Katherine outside to talk about what Katherine really. Their conversation is heard loud and clear from inside the house. So much for secrecy…

Katherine runs into Mrs. McCluskey and says how embarrassed she was about the big reveal, but Mrs. McCluskey, who again I wish was my neighbor, tells Katherine that she has two choices: either dump Robin or move away with Robin to escape the Wisteria Lane gossip… but face more gossip when they get to where they are going. In short, screw what people say. Live your life, Katherine!

Robin returns home to find her bags packed and Katherine with a stern face. Before I can get “DAMN, THAT’s COLD!” out my mouth, Katherine says that Robin needs to go… and that she needs to go with her. AWWWWW!!!!!! Robin picks Paris as the place to go and they leave for France. Bye, Kobin!!!! Hopefully this vacation lasts a week and they are back. 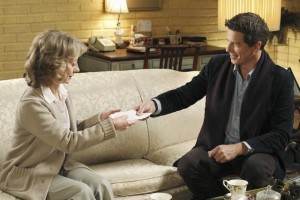 Angie vs. Her Past

After getting back from NYC, Angie pissed Nic off by revealing the true father of Danny to Angie’s mother. Nic feels that he is Danny’s rightful father since he took care of him since birth and protected him. Angie doesn’t think any differently, but feels that they need to keep shut about Patrick Logan being the real father.

Meanwhile in NYC, Iris Beckley, Angie’s mother’s neighbor, contacts Patrick Logan (the man himself, John Barrowman) and the two set up a meeting to exchange money and info.

Nic finds Danny working on his bike in the garage. After Danny talks about getting a job at the coffee shop with Eddie, Nic comments on Danny’s growing sense of responsibility. Nic’s entire reason for coming to Danny was to reveal Patrick Logan as his real father, but after Danny says nonchalantly that Nic is his dad during their conversation, a proud Nic decides to keep his mouth shut and remain just that: Danny’s father.

Back in NYC, Patrick shows up to Iris’s house with flowers. The two have tea and make the exchange, but Iris wants to now question what Patrick wants with Angie, because she just figured out $1000 dollars is not enough to get caught up in some drama. Patrick says that Angie took something from him when Iris asks if he would hurt Angie, because she doesn’t want that to happen. Well you should’ve thought of that in the first place, lady, I mean $1000 in NYC can only get you so far… Anyway… Patrick scares the lady into silence before he pulls his scarf off and seemingly kills her. Hmph.

The night ends with Danny leaving for work and Patrick watching his son from his car a distance away.

– Andrew and Orson, I smell a spin-off.

– John Barrowman. We were only teased to what this man can do and we have to wait till mid-April for his rampage to commence?! Blasphemy!

See you till then…