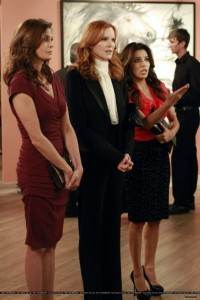 The opening monologue for tonight’s Desperate Housewives included the words ‘but so many secrets led to a falling out’and as we move deeper and deeper into the season, we’re starting to see just how much this statement is true. The four ladies are, and have always been, about teamwork, something that has been falling to the wayside in the past few episodes.

Bree hears a noise in her house and calls 9-1-1 freaking out. Who should show up to investigate? None other than Chuck, who backhandedly starts to interrogates her about Gabrielle’s step-father on the night of the dinner party. When Bree defends herself, Chuck tells her she’s the victim in this situation. What makes him think that? Chuck answers with the obvious — someone is trying to rattle her, because they think she’d hiding something — or they want her to crack. He then tells her not to lose any sleep, because he’ll be keeping an eye on her. Creepy!

Gabrielle helps Carlos, who has had another ‘incident,’with his hangover. Carlos tries to apologize and Gabrielle tells him that he needs to get help before he falls apart. He tries to make himself go into work because he has to sign payroll, but Gabrielle offers to sign his name and go in for him. Meanwhile, in Susan’s art class, Zeller introduces a special guest — his art dealer, and owner of the Bergman Gallery, Felix Bergman. The little man amusingly goes around critiquing everyone’s paintings, causing Susan to dub him ‘a little ball of hate.’Of course, Susan’s painting of the ladies”confession’is the one thing Felix does like, prompting even Zeller to be surprised.

Lynette and Renee are in the middle of closing a deal with a client for their design firm, when Lynette realizes it’s her 22nd wedding anniversary. Their client tells her how she changed her life by changing her clothes and hair to show a different side of herself, causing Lynette to think that she’s giving up on her marriage too easily. Renee provides some insightful (and serious) advice here, and it’s a nice change to see Renee playing the sincere good friend role instead of someone who just wants sex.

Bree goes to Gabrielle and laments how bad things have gotten between the girls. She starts to tell her that Chuck came by, but chickens out on the details when she finds out that Gabrielle is still dealing with a drunk Carlos. Gabrielle goes to Carlos’office to sign his paychecks, and finds out that Mr. Sweeney, one of the firm’s biggest clients, is coming in and wants to talk to Carlos. Of course, Gabrielle thinks she can handle things herself by sweet talking him which obviously doesn’t work. Thankfully, she’s saved by Jeffrey, a friend at the firm who gets Gabrielle to tell him what’s going on with Carlos, because he wants to help him get better. We know that this isn’t going to end well, and sure enough, we find out that Carlos’supposed ‘friend’is really more of a backstabbing snake. 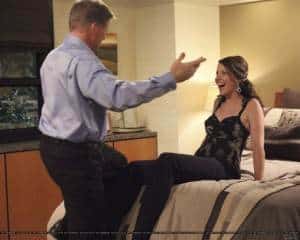 At Zeller’s studio, Felix is still drooling over Susan and her art. He wants to feature it in his gallery, and Susan, while flattered, knows exactly why this can’t happen and turns his offer down despite Zeller’s persistence. Lynette shows her new (crimped and curled) self off to Renee, who is a little surprised by the transformation of her friend. Renee can’t understand why if Tom is seeing Jane, he sent her flowers for their anniversary but Lynette is determined, saying she’s going to go over to his apartment (since she got the keys from Penny) and put a bottle of scotch on his nightstand, since that’s their ‘anniversary’thing.

Chuck shows up to bother Bree again, saying he’s ‘not done with her.’He continues to ask her about Gabrielle’s step-father, bringing up coincidences about the murder and tells her that he feels that something bad happened. He actually doesn’t think that Bree has done it, but he thinks she’s protecting her friends who have committed the crime. It was a nice moment in which Bree got to stand up for herself and defend her friends, telling Chuck she’ll protect them at whatever cost, no matter what happens. After eight years together, these women truly are family and this season is really bringing that loyalty out.

Gabrielle goes to find Jeffrey and right her wrong of ratting Carlos out. Jeffrey uses her to rat Carlos out in front of Mr. Sweeney, who asks Gabrielle to bring him to the house. He arrives to greet a still hungover Carlos, who thinks he’s there to yell at him. On the contrary, he’s come to try to convince Carlos to go into rehab, as Mr. Sweeney was also once in Carlos’position. 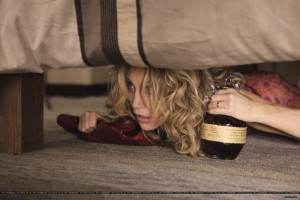 Lynette sneaks into Tom’s apartment with the bottle of scotch, but doesn’t get far before Tom and Jane come home. She hides under the bed, and almost gets away with not being caught until they start making out, which causes her to freak out. She apologizes, saying she just wanted to bring him his scotch in return for the flowers and finds out that Tom didn’t technically send them — they were sent by accident because he wanted them sent every year. It’s almost a wake-up call for Lynette, who seems to realize that things really are over between them.

Zeller brings Susan to the gallery, saying that he did something she’s going to thank her for. Susan sees her photo displayed, and while Zeller thinks he did a good thing by helping her get over her terrified feelings of displaying her art, Susan is both mortified and worried at the fact her work will be seen by the public. She calls Bree and Gabrielle so that they can help pay for the painting and get it taken away. Despite their quick actions, Chuck shows up and calls them out on their crime (with surprising accuracy thanks to her paintings.)

Chuck tries to get the girls to confess and tell them who the body in the painting is, but the girls refuse to crack. Chuck evilly says that he’s more or less close to figuring everything out, but that he’s going to take his time because he wants to see ‘the ice princess break.’Gabrielle and Susan find out the secret Bree has been keeping to try to protect her friends (Alejandro being reported as a missing person) and become upset, leading hurt feelings to again divide the group. As we close the episode, we see Bree resort to drinking in order to deal with her issues.

This was an interesting episode, if not for the fact that it again kept one housewife out of the loop — something that I think will come into play later in the season. We know the ladies work best when they’re all together helping each other, and I’m beginning to think that their individual ‘personal” issues that are keeping them from confiding in each other will eventually come to head as this mystery grows more intense. What did you think?