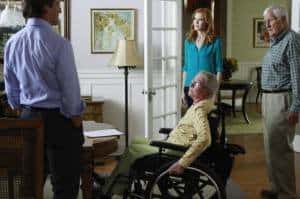 ‘Kiss Them Goodbye’has been the motto of the final season of Desperate Housewives since January, and tonight, after eight years, we finally DID kiss them good-bye. Personally, I thought the series finale — which steered clear of the big intense and shocker moments and instead focused on tying up storylines — was both fitting and satisfying.

How does the finale start? With someone who has been a part of the Housewives crew since the very beginning: Mrs. McCluskey. When she tells the girls that she’s starting hospice service because the doctor thinks Roy can’t take care of her, they offer their services instead. Mrs. McCluskey is hesitant, but eventually agrees. How does the finale start for our other Housewives? Gabrielle is reading the ‘sports’section of the paper, aka, hiding proof from Carlos that the trial is not going well for Bree. Susan is trying to keep the sale of the house secret, since she hasn’t told the girls she’s moving yet. And Lynette is trying not to freak out when Penny calls and tells her Jane’s gone and that Tom wants to see her.

Trip tells Bree that he might have to put Gabrielle back on the stand, because she has connections to the case with her stepfather being the one who was murdered. In the meantime, Ben goes on the stand but refuses to talk, even after the prosecutor plays a recording of Ben and Bree’s conversation from a few episodes ago where Bree essentially confesses to her murder. Ben gets taken into custody, and Renee doesn’t exactly take it too well. When she visits him in prison, she wants to know why he won’t answer anyone’s questions. Ben tells her about the murder, which leads Renee to remember an important detail about the night of the dinner party. Unfortunately, the prosecutor hears every word and threatens Renee with Ben’s deportation should she not take the stand. 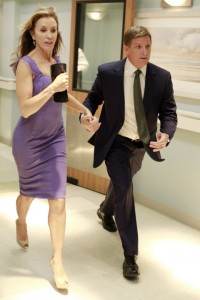 The girls are less than thrilled with their friend after hearing her essentially out Bree to the jury, and Renee gets upset, firing back that she doesn’t feel like much of a friend since they’ve kept secrets from her and they don’t seem to treat her as part of the group. Trip, meanwhile, angrily tells Bree she has to tell the truth about what happened before things get out of control. He then kisses her, because, well, we can’t get through this hour without some sort of scandal, right?

Lynette is getting ready to see Tom, convinced he’s coming over to take her out and confess his love for her. Unfortunately, Tom’s purpose of the visit is quite the opposite — he tells her that he’s filing the divorce papers in the morning, but wanted to tell her in person. Dammit, someone get these two back together already!

Susan is still trying to keep the sale of her house a secret, which doesn’t go so well when Gabrielle walks in on two potential buyers. At the trial, Trip calls Gabrielle back to the stand and asks her to identify her stepfather. Gabrielle at first lies and then confesses to knowing him. In order to get the attention off her friend, Bree faints and causes a court recess. Meanwhile, Carlos gets angry with Gabrielle for wanting to take the blame for the murder he committed, and tells her he’s going to confess because Gabrielle has inspired him to be a better person. Mrs. McCluskey overhears the whole thing and takes it upon herself to go to Trip. She asks to testify, telling him to put her on the stand and using her condition to sway him. 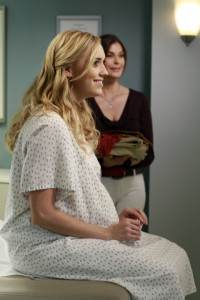 On the stand, Mrs. McCluskey confesses to killing Gabrielle’s stepfather, effectively taking the blame off Bree. While the girls try to contain their shock, the prosecutor then tells the judge she’s dismissing all charges against Bree, and that no charges are being pressed against Mrs. McCluskey because of her age. As the girls toast to Bree’s freedom later on, Lee comes by and again asks Susan if she’s told the girls about moving. Susan still hasn’t opened her mouth, but Lee tells her that she has to — because he just got an offer. Trip stops by but Bree shuns him, still upset about the fact that he put Gabrielle on the stand.

A slightly melancholy Tom goes to visit Roy, admitting that he filed his divorce papers. Roy starts talking about his love for Karen, opening up about their final days and telling him that it’s important to say things to the people you love before it’s too late. This strikes something in Tom, who stops Lynette as she’s leaving her house and tells her that he loves her — and that he’ll always be the love of his life. FINALLY! Lynette confesses that the person she’s really in love with is Tom, and the two share a kiss. I dare anyone to say they didn’t get teary during this scene…a rather fitting way to end the first hour, don’t you think? 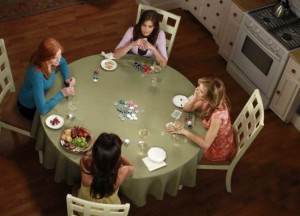 Our second hour begins where it all started — with a woman and her secret. We meet Mary Alice as she’s moving in and meet Mrs. Huber in all her gossip-y glory. I do love how we had so many callbacks to the series over the years in these final episodes. (By the way, how awesome was that final opening, which was a special montage depicting some of the more memorable moments of the show?)

Susan finally tells the girls she’s moving and everyone is in shock — so in shock that they don’t even notice the return of their old neighbor Katherine (Dana Delaney.) Katherine tells the girls that her relationship failed but that she started a business that has taken off. When Gabrielle asks what brought her back, she admits she has a proposition for Lynette. The catch? It’s in New York.

Gabrielle finds out that she got a new promotion – she’s now the head of VP Sales. Susan and Julie are at Julie’s doctor appointment, and while visiting Roy and Mrs. McCluskey, Bree gets a call from Trip but refuses to take it. As the girls prepare for Renee’s wedding, Bree stops by to see Mrs. McCluskey while the girls go ahead in the limo…where Julie’s water breaks all over Renee’s dress. Never a dull moment on Desperate Housewives, even in the final moments! Renee, of course, wants to go to the shopping center to get a new dress while Susan wants to get Julie to the hospital. I have to admit, I laughed at the scene with Renee grabbing the dress from the woman and her daughter. While Renee is busy shopping, Susan takes matters into her own hands and steals the limo, leaving Renee and Gabrielle high and dry. 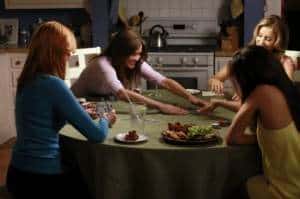 Renee finally gets herself to her wedding, where Lynette admits to Tom that she’s considering taking the job that Katherine offered her. Tom is less than thrilled — and man, it’s like Desperate Housewives knew we couldn’t end this without a little more drama! Bree finds Trip and thanks him for all his help on the trial, and Trip calls her out on not telling him her real feelings. Bree asks him to explain why he even likes her and a simple kiss seems to answer her question — could Bree have finally found happiness after all these years?

Gabrielle and Carlos reach an agreement on Gabrielle’s new job, while Julie and Susan share a heartfelt moment in the hospital. Meanwhile, Lynette is called upon to give Renee’s toast and essentially ends up using the speech to admit her feelings to Tom. I really did love how the finale focused on the relationships of these women and the people in their lives, arguably more important than murders or trials or cheating husbands.

As Johnny Mathis’Wonderful, Wonderful! plays on the record player, we get a montage of moments – Mrs. McCluskey passing away, Julie giving birth, and Renee and Ben celebrating their marriage. How heartbreaking was it to see Bree break down at Mrs. McCluskey’s beside after getting the call from Roy, interspersed with Tom and Porter staring at Julie’s baby? Life given, life taken. Kudos for Desperate Housewives for a touching goodbye to one of television’s best characters (there’s a reason Kathryn Joosten won two Emmys for this role.) 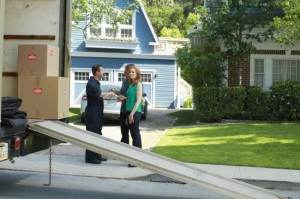 As Susan prepares to move, the girls play one last hand of their famous poker game, and Bree realizes that it might be the last time they’re all together. Gabrielle admits that she never thought they would ever be apart from each other — or Wisteria Lane, for that matter. ‘We shared everything,’says Susan, and I can’t think of a better way to sum up eight years than with that sentence. As the clock ticks down to the final moments of the last two hours, we get a chance to see (per Mary Alice’s voiceover, of course) where the ladies ended up.

Lynette and Tom left Wisteria Lane for New York, where Lynette became CEO of her company. The two bought a new townhouse and raised six grandchildren.

Gabrielleand Carlos left Wisteria Lane after Gabrielle got her own show on the Home Shopping Network, and moved to a mansion out in California.

Bree and Trip, happily married, left Wisteria Lane and moved to Louisville, where Bree joined a club for Conservative Women and ended up being elected to the Kentucky State Legislature.

And Susan, who was the first to move, brought everything full circle as she introduced herself to the woman buying her house — and promised her that nothing in suburbia was every really boring.

A lot of people (myself included) thought the last shot of the series would be the four women together, either during a game of poker or otherwise. Instead, we got two interesting final shots — a look at all the ‘ghosts’of the Lane as Susan drove away, reminding us of everyone who had been a part of the show for its eight years, and a shot of the new owner of Susan’s house as she put away her own dark secret. Yes, Wisteria Lane will always have secrets — you just have to know where to look to find them.

I have to admit, I got teary more than once during these two hours and I’m extremely satisfied and happy with the way everything ended. I may have not agreed with all the choices this show made over the years, and I may have even not been as invested in some seasons — but I still will miss having these ladies around every Sunday night. And I’m betting you will, too.

Thank you to everyone for reading, commenting and sharing this final season with me! I hope you enjoyed it as much as I did. Share your thoughts below on what your favorite moments of the finale were, and what you’ll miss the most!