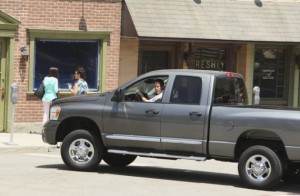 if you need a refresher on last week’s events, my recap is right here.

“Watch While I Revise The World” opens explaining that Susan and Carlos were never friends because they were so different. It cuts to Susan waking up in the middle of the night because she can’t sleep and it turns out Carlos is having the same problem. They meet in the middle of the night to talk. Carlos tells Susan how he keeps seeing Gabrielle’s stepfather everywhere he goes. Susan says that she feels like she’s walking around with a guilt sign everyone can see. Both agree they think they might be losing it. Susan says when she walked out she was hoping she’d run into Carlos and he says the same. They walk home, talking about other things and unknowingly, Mike watches them say goodnight from the window.

Gabrielle goes to bring Bree a smoothie as a consolation for splitting up with Chuck, and finds out she actually didn’t. Bree tells her she was going to dump him but didn’t because she thinks Chuck was the one who wrote the letter. Gabrielle doesn’t believe her story but tells Bree she should hack through his stuff to find out what he knows, anyway.

Renee is in the middle of getting a massage in her house when Lee barges in, begging her to take their daughter Jenny bra shopping because he doesn’t think he can handle it and needs a woman’s help. Renee tries to get out of it but finally relents. When Renee goes to ask Lynette if she can come with her, she says she can’t because her sister Lydia is coming. And boy, does she ever. Lynette expects a down-and-out depressed girl, and her sister arrives ‘a changed woman,’telling her she got engaged to a hippie man named Rashi who changed her outlook on life.

At Susan’s house, Mike confronts her about assaulting a police man and Susan makes up a story for how she got arrested. Mike doesn’t buy it, because he says the guy on the phone called him ‘Mr. Solis.’Susan says she was so embarrassed she didn’t want to tell him, and Mike makes her promise there’s nothing going on between her and Carlos. He admits he’s been watching them and doesn’t like the sneaking and the lying she’s doing.

Lydia and Rashi are talking at Lynette’s house about how they got together, much to Lynette’s dismay. She attacks her sister and says she can’t marry ‘that sunflower seed’because the way she acted around him wasn’t a true representation of her true character.

Susan, meanwhile, is doing some community service around town, and Carlos shows up saying he started reading the book she recommended and wanted to come talk to her about it. He tries to get her to go eat lunch with him, and doesn’t understand why she’s backing off. Carlos persists, though, and asks if she can work with her. Seeing no harm in that, Susan lets him. Oh, Susan. Not the smartest, sometimes. 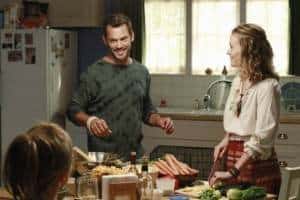 Jenny and Renee come home from shopping, and Lee finds out she’s bought her make-up along with a bra. Lee gets defensive when Renee says she can’t tell him things that Jenny has apparently only told her. When Lee again finds Jenny with Renee (who is giving her life lessons that are hilariously too old for her), Lee gets upset again. He yells at her, grounding he and then tells Renee she’s not her mother.

Bree gets Chuck occupied with helping her cook while she goes to snoop through his stuff. She finds a photo of her own hand taken while sleeping, and a folder from Fairview Police Department with her name on it. Naturally, she freaks out and tells Gabrielle, who thinks that whatever in the envelope is what he’s going to use to nail them. Lynette, meanwhile, is having dinner with Lydia and Rashi, and when he takes a walk, Lydia and Lynette get into a fight. He comes back and sees them fighting, and then leaves on the demonstration retreat on his own. Lydia says now that he’s seen ‘the real her’, he has to meditate over whether or not to marry her. Lynette offers that maybe it’s the guy that’s the problem and Lydia admits that it’s her.

When Lee comes home and finds Jenny not in her grounded room, he yells at Renee thinking she had something to do with her disappearance. He finds out she’s hiding in Renee’s house and Jenny says sometimes it would be nice to have a mother. Lee can’t accept this, letting his hurt bubble over and admitting that this is his worst nightmare come true – what if him and Bob aren’t enough and she does need a mother? Renee tells him that he’s being silly, that they’re doing an amazing job with her and that for the first time in her life she actually enjoys hanging out with a kid.

Lynette goes to the meditation retreat in order to try to make good with Rashi. She interrupts him meditating and convinces him to come with her. She says she can’t leave Lydia, and Rashi says he can’t be with her because she’s too negative and exactly like his family. He admits that his name is not Rashi, and that he grew up in Long Island with a family that acted the way they did in the kitchen, and reformed so he didn’t have to think about his past life. When Lynette returns home, Lydia tells her that he had a chance to think at the retreat and that he can deal with her change. Lynette apologizes for being so rotten to her sister because she’s jealous that she was able to get a relationship that seems stable and happy.

Mike drives by and sees Lynette and Carlos talking by the mural. They try to hide, ending up in the back of a truck and realizing that they might be more than just friends. Carlos says nothing is going on, and Mike finds them and punches out Carlos, clearly upset.

Chuck comes home and Bree suggests going for a walk, but Chuck says he has something better in mind. He won’t tell Bree where he’s going, so Bree freaks out and calls Gabrielle, who says she’s going to follow them to make sure they’re okay. Chuck takes her to a restaurant and Bree tries showing him stuff on the menu while Gabrielle tries to steal the letter from his jacket. Upon successful retrieval, she meets Gabrielle in the bathroom and they open the envelope, finding not a court order or a murder note — but an engagement ring. Suddenly, Bree realizes that Chuck taking pictures of her hand for ring sizes and wants to marry her — but Bree knows he’s not the guy for her in the long run.

Carlos and Susan go to Mike and finally admit to the truth. Bree goes back to dinner and dumps Chuck, who is clearly shocked and he’s hurt, calling Bree out for her behavior following the crime. He thinks she’s seeing someone else and that the letter is from whomever she’s having an affair with, then walks out, saying she’s made a very big mistake.

Obviously, this puts all the housewives in interesting predicaments. With Mike knowing the truth, how will this affect not only his relationship with Susan but what he thinks of his other friends? Will Chuck really go to dire lengths to make Bree pay for hurting him? He certainly has the ability to do so, based on his profession. It also seems like we’re heading into a possible relationship for Lynette with the way she keeps being reminded she can’t find a guy, which I honestly would be excited to see — new dynamics and characters on Wisteria Lane are always fun.

What did you think of tonight’s episode?