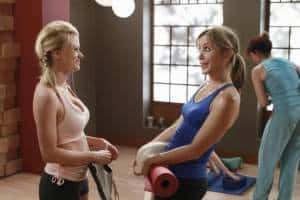 This week’s theme on Desperate Housewives is how to learn lessons and deal with conflicts, and boy, do our ladies get schooled – in more ways than one. We start right off with Gabrielle, who is dropping Juanita off at school. In classic Gabrielle fashion, she’s sick of waiting like every other common person and tries to get Juanita to leave the car before she’s in the designated safe ‘green zone.’When Juanita gets caught by Dana, the school cop, she revokes Gabrielle’s ‘green zone’placard saying this is the third time she’s committed such an offense. From now on, she has to park in the far away ‘B’Lot and walk Juanita twice as far to the school as opposed to dropping her off.

Lynette, meanwhile, is attempting to get her life together by organizing and reading up on relationship books, but Renee calls her bluff, saying that Lynette should just accept she’s having issues with Tom. When Tom comes to pick up the kids, Lynette finds out that he’s been whitening his teeth and working out. Renee tells her that it’s a sign her husband has been sleeping with someone and Lynette refuses to believe this, saying that Tom would tell her if that was the case.

Bree has become increasingly afraid of checking the mail, worried that she’ll get another letter. While standing in the driveway talking with Gabrielle, Bree’s daughter Danielle comes by to visit. Danielle’s husband apparently left her, and Danielle wants to commiserate with Bree over their failed relationships. Bree tells Danielle she wants to attempt to help her put her life back together, but Danielle wants to ‘chill out’in the aftermath of her break-up. She threatens going to Andrew’s instead, and in an attempt to get Danielle to stay, Bree promises that she won’t criticize her — at least, not too much.

Susan is still having issues with telling Mike about the murder, worried that because she told him, he won’t love her anymore. Mike says there’s nothing that she can do to make him stop loving her. Now that the secret’s out, Susan just wants everything to go back to normal, but Mike says that won’t be easy – he’s done things like this, and he knows they won’t just disappear. Susan hopes that if she focuses on other things in her life, everything will improve and mentions taking a special painting class with a world renowned painter, Andre Zeller, to take her mind off things.

While walking from the dreaded ‘B’Lot, Gabrielle makes friends with some parents who were also banished due to Bad Cop Dana. Upon finding out many parents have been treated the same way, Gabrielle says that they should find out when the next PTA meeting is, band together and try to overthrow her with a majority vote. Susan goes to her private painting class, where she assumes that because of her talent, she’s a natural shoe-in. Zeller, however, tells her that while her paintings are good, they’re simply not real art material. Susan can’t understand and Zeller says he’s looking for serious media — not housewives trying to take a class. He asks Susan if she has anything else, and Susan vows to bring in a new painting tomorrow. 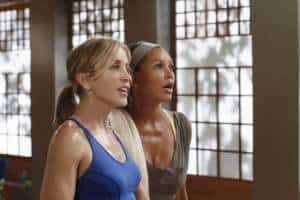 Danielle is vegging at Bree’s house, while Bree tries to get her to open up about her future. Danielle admits she’s thinking of starting her own business selling exercise equipment on the internet — if she can get the start-up money. Bree agrees…and we all know this isn’t going to end up well in the end.

Tom comes over so Lynette can talk with him about how to divide the kids for the week. While Lynette confirms their booked couple’s appointment, Tom gets a phone call that makes Lynette suspicious. Eager to find out if Renee’s suspicions are right, she buys Paige an iPad with a camera, saying it’s so she can ‘keep in touch’when she’s away from home. Of course, we know the real reason for the motivation behind Lynette’s sudden generosity, and she’s soon calling to see if she can view Tom’s apartment. She ends up catching Tom talking outside with Chloe, a girl in the building who Paige says apparently runs a booty class at the fitness center.

At the school meeting run by Dana, Gabrielle tries to get everyone to stand up and overthrow her. Ever the smooth talker, Dana wins over Gabrielle’s comrades by offering to give back their parking placards and just to be even crueler, makes Gabrielle park in the ‘C’Lot — even farther away than the ‘B’Lot. Bree, meanwhile, goes to visit Danielle who is busy working on her new business of — surprise! Not exercise equipment but rather, sex swings. When Danielle comes home and finds Bree trying on the sex swing, the two get into a fight. Danielle storms off, yelling that Bree just lives to judge her.

Susan brings her new painting (a bare tree, symbolizing loneliness and isolation) back to Zeller, but he doesn’t buy it. He accuses Susan of being afraid of ugly and Susan breaks, throwing a tantrum and taking her anger out on a blank canvas as her emotions get the best of her. Later, she freaks out to Mike about the situation, and Mike says that what happened in the woods isn’t going to go away — it’s always going to be a part of her. Mike says if she can accept that fact, she can live with it…but if she doesn’t, that’s when it can consume her and she doesn’t want to live like that.

Bree finds Danielle and admits to being judgmental, saying she’s far from perfect and has no right to be critical, and certainly no room to judge her daughter. She asks for forgiveness, which Danielle grants and the two make up. Susan returns to art class to pick up her portfolio, and Zeller invites her to sit down — she’s been accepted to the class after all, based on her actions the other day.

Late for another appointment and no time to walk from the ‘C’Lot, Gabrielle again attempts to drop Juanita off at school — in the green zone — without the designated placard. While not paying attention, she accidentally hits Dana with her car and breaks her neck. Upon visiting her in the hospital, Dana admits there’s a reason she asked Gabrielle to come by — she’s no longer able to carry out her duties because of her injuries. The bylaws state she’s supposed to appoint an acting president, who she has decided should be Gabrielle. When Gabrielle asks why, Dana says this job has turned her into a monster — no fun, no friends and no husband. She says she wants her to be as miserable as she has been made to be, and threatens press charges for the accident if Gabrielle doesn’t accept.

Lynette drags Renee to booty class so they can spy on the girl they believe Tom is hooking up with. Lynette chats it up with Chloe, not impressed by her apparent bimbo personality, but gets caught by Tom before she leaves. Lynette admits that she knows Tom is seeing someone, and Tom tries to say it’s nothing but a few dinners. He then says the person he’s not seeing is Chloe — it’s Chloe’s mom. Obviously upset, Lynette asks when he was going to tell her, and he says that he was going to wait until counseling.

The episode ends with Chuck in his office, still upset over the way Bree dumped him as he was about to propose. He says he’s not quite ready to ‘let this one go yet’and as we ponder what his words might mean, his partner drops a folder on his desk — a new missing persons report with a picture of Gabrielle’s step-father.

Things seem like they’re really heating up on Wisteria Lane — and there’s no doubt this storyline is just beginning to get interesting. What do you think will happen with Tom and his new fling? Will Lynette retaliate? Are you liking the final season so far?