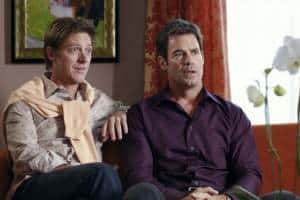 A lot has been going on between our ladies on Wisteria Lane, so if you need to catch up, check out my recap. As the girls drive back from the woods, they freak out over who might have dug up the body. Gabrielle worries about going to jail, while Bree says they shouldn’t be worried – the police can’t be involved because there would have been crime scene tape. She then proposes that Susan must have done the deed because she’s been so crazed with guilt lately. Gabrielle agrees, and though Lynette dubious of Bree’s assumption, the two agree to help find out more information.

Speaking of Susan, it’s portfolio review time in Zeller’s class and he’s already peeked into what Susan has to offer — which is nothing good. He again publicly humiliates her and Susan gets upset saying that’s not how you motivate people. Zeller argues that she hasn’t progressed since she started the class.

Over at the Scavo household, it’s awkward question time as Penny finally asks Lynette if Jane and Tom are going to get married, because ‘they seem really happy together.’Lynette tells her that just because people are happy, it doesn’t mean that they’re going to get married. Tom and Jane come by to pick Penny up and take her to a show and Renee witnesses the whole exchange, telling Lynette it’s bad enough that Jane stole her husband. She’s going to teach Lynette how to make sure her daughter isn’t taken away, too.

As Gabrielle makes dinner for Celia and Juanita (who are running around amusingly uncivilized) she realizes she can’t think of anything without worrying about the future, especially when Juanita asks about their plans for the annual spring vacation. She admits to Carlos that she doesn’t know what to do, and unknowing of the current situation, he tries to assuage Gabrielle’s fears about not going to jail by saying it’s been two months since the incident. This doesn’t stop Gabrielle from worrying, however, leading her to obsess over who will take care of the kids if something were to happen. Since Susan is apparently the guardian they appointed in their will and may at this point be sitting next to Gabrielle in a jail cell, the two decide to seek out new guardianship — turning to Lee and Bob. Problem is, the two men are less than enthusiastic about the idea of becoming surrogate parents to two ‘monsters.’Gabrielle and Carlos insist that they aren’t as terrible anymore, and Bob and Lee suggest that the family has them over for dinner so they can see this behavior change for themselves. Of course, Gabrielle’s children are nowhere near an acceptable level of maturity, and despite a day home from school filled with attempts to civilize them (including knowledge of Broadway musicals), the girls don’t make much progress.

Lynette begins her game of guilt with Penny, going through her baby book and attempting to convince her that they’re not really a family anymore now that Jane’s in the picture. Her bribing and guilt-tripping works, albeit a little too well as Penny asks Lynette to cancel her plans with Tom and Jane so she can spend time at home. Tom accosts Lynette, saying he’s been getting a lot of messages about Penny not wanting to come over. He misses his daughter, and asks her if she told Penny anything about not liking Jane. Tom says they have to make sure that things between them stay between them — they shouldn’t get the kids involved — and asks Penny if he wants to come meet him after school to play catch with him so they can have much overdue father-daughter time. Penny agrees. Meanwhile, Susan is attempting new work for Zeller as Bree stops by and attempts to try to find out if she knows anything about the body. When Susan starts talking about the voices in her head, Bree thinks that she’s guilty until Susan realizes something’s off. Bree almost starts to tell her what they found in the woods when Mike comes home early, saying that the project for Ben has been halted because of a situation at the work site. 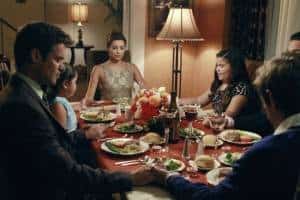 Bree goes to Ben, bringing him lunch to ‘celebrate his first day of construction’and playing dumb about they haven’t started working on the project yet. Ben admits to finding the body in the woods and Bree tries to find out if he already called the police. Ben says he hasn’t, because he doesn’t want to lose his investment on the land and all the work he’s already put into getting ready to break ground. She runs off after failing to convince Ben to not go to the cops and Ben follows, finding her crouched in the woods by the open grave. She admits that she knew the man who they dug up, and when Ben asks if he killed him, she says she didn’t – but her friend did, and that she helped bury him. I have to say, I didn’t see that confession coming in this episode so kudos to Desperate Housewives for keeping things interesting. Bree hopes that because she’s open and honest with him, Ben will take pity on her and help them cover it up. Unfortunately, Ben says he can’t do anything.

Over at Gabrielle and Carlos’dinner party, the two girls do a decent job of impressing Lee and Bob with their maturity and knowledge of theatre. Unfortunately, things go a little haywire when they go to leave and Carlos lowers the garage door revealing a graffitied ‘Gays R Stupid.” Gabrielle goes to yell at Juanita, wondering why she would do something like that and Juanita says she heard them talking about the guardianship deal. She asks if Carlos is dying, because everyone seems sad and Gabrielle and Carlos seem different. Gabrielle tells her that they’re fine and tries to console her while Susan pays a visit to Zeller, complaining that he’s ‘broken’her and that she can’t do anything but think of how much he hates anything she’ll do (she also finds out that her classmate Amy is sleeping with him.) Zeller says that every time she sits down and doesn’t paint the fear inside her, she’s lying. He then tells her not to bother coming to class anymore.

Lynette drives Renee to the field where Tom is supposed to meet Penny to make sure that Jane doesn’t show up. To her delight, there’s no Jane – but there’s also no Penny. She realizes how much Tom is hurting over the fact that his daughter doesn’t want to spend time with him, and finds out that Penny is upset with Tom, blaming him for leaving Lynette and ruining their family. In another surprise visit, Chuck shows up asking Bree if she’s seen a missing person — Gabrielle’s stepfather. He brings up the night of the dinner party and implies she knows exactly who he’s referring to, threatening her until Ben intervenes and threatens Chuck himself. Ben asks if the confrontation was about the body, and then tells her he got rid of it as a favor.

Mike comes over and Ben asks him to take care of the burial, which Mike promptly admits to Susan. As the girls celebrate their new found ‘freedom,’Susan runs over and tells them Mike’s news. Bree admits that they already knew and Susan is understandably upset. As secrets come out, the girls begin fighting — both Susan and Lynette are unaware of the letters Bree has received, while no one knows that Carlos is the one who broke the secret to Mike about the murder. Lynette leaves angry, and Susan goes home and begins painting exactly the way Zeller wants her to. The result? A complete depiction of the night in the woods. Mike, meanwhile, does his duty and buries the body under a construction site.

Obviously, we know that this isn’t going to end up well for anyone, considering that something will undoubtedly happen with Susan’s painting that will invoke more suspicion — and we still have more than half a season to go before this mystery is (hopefully) solved. I did like the return of Chuck, who I think will play a major role in the episodes to come and I’m looking forward to seeing how Ben continues to factor into the story.

What did you think of tonight’s episode?