Desperate Housewives fans will have to wait until February 21 for a new episode. But those of you who like the recent addition of Julie Benz on the show will be happy, because she’s sticking around for a little while longer. ABC has released promo photos and a synopsis for the episode, which you can view below. 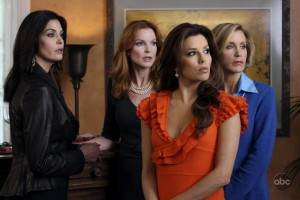 “Lovely” – Susan causes quite a stir when she invites a former stripper into her home on ABC’s “Desperate Housewives,” SUNDAY, FEBRUARY 21 (9:00-10:01 p.m., ET). Former exotic dancer Robin will have a profound effect on Susan’s friends — with three teenage boys at home, Lynette will keep a watchful eye; Bree picks up a few tricks to engage Orson; Gaby looks for help with troublesome niece Ana; and Katherine will find a friendly companion.