After a new episode of Desperate Housewives on February 28 (check out promo photos for the episode), the show will be going on a short hiatus until March 14. ABC has released a few promo photos and a synopsis for the March 14 episode, which you can view below. 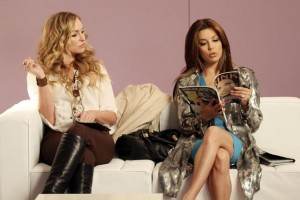 “Chromolume #7” – Gaby and Angie head to New York in search of Danny and Ana, on ABC’s “Desperate Housewives,” SUNDAY, MARCH 14 (9:00-10:01 p.m., ET). While in the Big Apple, a chance encounter with supermodels Heidi Klum and Paulina Porizkova leads Gaby to an unexpected revelation about herself. Meanwhile, Lynette and Tom are in for a big surprise when Preston returns from Europe; Mike is determined to show Susan what a man he is after feeling emasculated; Bree discovers a shocking connection to her new employee, Sam; and Katherine is confused over her feelings for Robin.

Guest stars include Heidi Klum as herself, Paulina Porizkova as herself, Julie Benz as Robin and Sam Page as Sam.