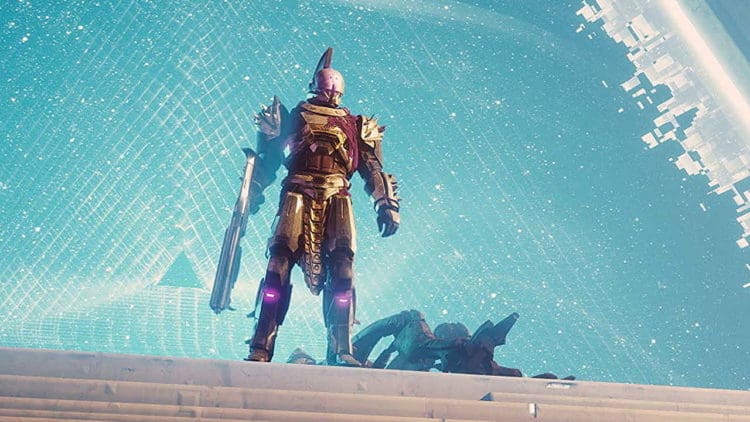 Destiny 2 fans that know Saint-14 strictly as “that one Exo Titan that we saved from being lost in time” and the “Trials of Osiris vendor” or “that one guy that’s obsessed with pigeons” will have been in for a pretty rude awakening when they found out about his….troubled history with the Eliksni, or the Fallen as many have come to know them. In a recently revealed cutscene from Destiny 2’s Season of the Splicer, the leader of the House of Light, Mithrax, was involved in a confrontation between himself, Lakshmi-2 of the Future War Cult, and Saint-14 himself. Saint tells Mithrax that he can’t expect the people of the Tower to live amongst their monsters, to which Mithrax replies with a Fallen story of a feared creature that called itself “The Saint.”

For those that don’t have any previous knowledge on Saint-14 in Destiny 2, or any previous Destiny lore for that matter, Saint-14 was the first Titan Vanguard – before Zavala – and was the Speaker’s right hand. Saint-14 fought harshly in the Battle of the Twilight Gap, after which he hunted down Solkis, Kell of the House of Devils. After finding Solkis, the two were locked in a terrible deathmatch in which Saint-14 used nearly all of his Light, but was able to focus what little Light he had left and pull it all into a massive headbutt that allowed him to pierce Solkis’ head with the horn on Saint-14’s helmet, defeating the Fallen House leader. This was the inspiration for the “Kellbreaker” Finisher, which is one of my favorite Finishers in the game, specifically because it brought some of the lore into the game. When Osiris was exiled from the Tower for his blasphemous thoughts and predictions about the Vex, as well as Saint-14’s fierce battles against the Fallen, he disappeared from the Tower. Saint left on a mission to prevent Osiris from going anywhere near the Vex, but was unfortunately stripped of his Light by the Vex and fell in the Infinite Forest after making note of his latest findings to Osiris, the Speaker, and to The Guardian. Fast-forward to the present day, we have saved Saint-14 from his Infinite Forest fate and he has now returned to direct the Trials of Osiris in the Tower. Saint-14 is an incredibly kind and heartfelt Guardian who never hesitates to offer aid to those in need – as long as those in need are of the same species…

Monsters in the Light

Season of the Splicer has seen many a troubling situation in regards to the Fallen and other members of humanity that currently reside in the Tower, and Saint-14 is partly to blame in this situation. Mithrax tells Saint-14 of a city greater than even the one that the Guardians were born in and currently reside in, the Fallen lived there with the Traveler until it left them. When the Eliksni went to chase the Traveler (the Eliksni called it “The Great Machine”), they found that something else was sent back. A horrible creature that murdered hundreds upon thousands of Eliksni, including children and innocents, without a care in the world. Mithrax then tells us through this story that the creature called itself “The Saint” as we see the famed Helm of Saint-14 burned in the shadows. This entire cutscene sent a chilling message to all that viewed it, as well as Saint-14 who now realizes that the Fallen are also just trying to survive on their own. He realizes that everyone around is making sacrifices, and that those in the Tower are not exempt from the need to sacrifice.

Do I think Saint-14 is actually a monster? No. Do the Fallen? Yes. I strongly believe that Saint-14 is much more easily swayed in his opinions and beliefs, unlike Lakshmi-2 who seems to be dead-set on getting the Fallen out of the city. I think that Saint-14 is sort of being manipulated and is having a hard time adjusting to the situation, but with time I do think that both Saint-14 and the Fallen – especially Mithrax – will be able to put the past behind themselves and hopefully learn to live in harmony rather than agony. While I do see some conflict coming between the two pretty soon, I do hope that things are not damaged being repair. Season of the Splicer is proving more and more with each bit of story development that monsters don’t just live and hide in the dark below, they can just as easily be living gloriously in the Light.