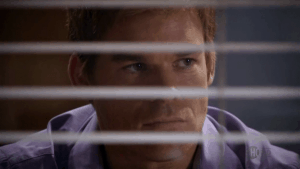 You can read Michael Mahoney’s review of this episode here.

This is the third to last Dexter episode of the season, so things are ramping up on all fronts. Allow me to try on these new gloves that Dexter bought me and we can recap what happened…

Planning for the worst, Dexter hands Harry over to his nanny, who is going to take him to his grandparents. He’s getting him out of Miami to make sure he’s safe and can focus on the task at hand: stopping Jordan Chase and his associates. He then takes Lumen to the apartment, a place that Chase doesn’t know about. Their first plan is to visit Emily Birch, whose blood was in the vial that Chase wore.

Since the new evidence was uncovered by the police, LaGuerta and Masuka let everyone know that Cole Harmon is once again their main target – though Dexter has already eliminated him. Deb and Quinn go to Chase’s office and find out that Harmon hasn’t worked there in over two weeks, as he asked for personal time. Deb is aggressive in her questioning, and Chase is bothered by this and says that they’ll need to go through his attorney for any further communication.

Dexter and Lumen visit Emily Birch, who refuses to say anything to them and is very troubled by their appearance at her front door. Dexter is then called away to help search through Harman’s house. Just one drop of blood was found, but more importantly, DVD’s of each of the victims are found. 13 in all; Dexter knows the last of the DVD’s contains the footage of Lumen. Dexter knows that Deb can’t see that footage, as she’s met Lumen and would recognize her. Dexter takes a blank DVD out of his drawer, scratches it up, puts a 13 on it and plans to replace the actual DVD with his blank DVD. He visits Masuka, who’s been going through them, and purposely knocks them all over and makes the switch. Masuka notes that there are 13 discs, but were only 12 locks of hair at Fowler’s house. Dexter brings the DVD home and shows it to Lumen. She asks if everyone saw it, he says no. She asks if Dexter watched it, he says he only watched enough to make sure it was her. He leaves the room, but can hear the audio coming from the other room as she watches the footage of herself on the DVD.

Arriving at work the next day to find Deb watching the footage, he realizes that Lumen was at home watching the night before, and they both want something out of this case, but he can only help one. Deb has started to figure things out after an all-nighter at the station. She notes that Dan the dentist was shot to death, Cole Harman was presumably attacked and Boyd Fowler has disappeared. The men aren’t on the run, because they didn’t buy a plane ticket and they aren’t using their credit cards, so she thinks someone is taking them out.

Lumen returns to Emily Birch’s with a recording of what happened to her. This time, she is allowed in. She talks to Emily about what happened to her and explains that she was the 13th victim, and the only one who survived. Emily tells her it was 20 years ago, and Jordan Chase was then Eugene Greer, and she points him out in the photo of the five men. One day she was drugged while on a walk, and she woke up naked and tied down in a cabin. She also tells Lumen that Jordan (“Eugene”) never touched her, but he told the other men to. This moment turned Jordan Chase into who is he today. She then explains that she took the photo of Cole, Dan, Boyd, Jordan and the fifth unknown man, who she reveals as Alex Tilden.

Dexter walks into the station to find Stan Liddy “leaving a note” for Quinn. However, we see that he isn’t leaving a note at all, he’s forging his signature, which he then takes to pick up some equipment for a stakeout: surveillance cameras, wireless microphones and a portable wireless recorder monitor.

Lumen reports back to Dexter with the information she got from Emily, and then tells him “I want to be the one to do this.” He warns her that it will change her, but she says she is already changed.

Deb and Quinn go to visit Alex Tilden, as his name turned up on a list of acquaintances of Cole Harman’s. He says he’s in a fantasy football league with Harman, so they talk on the phone often. He says he doesn’t know any of the three other men.

Dexter brings Lumen a present: gloves, just like the pair he wears when he’s on the hunt and in the kill room. Just then, we see that Liddy is parked outside and has the house bugged. He can see and hear everything inside. They leave and go to Tilden’s house to check it out. They find a box that contains a piece of jewelry from every victim. Dexter helps Lumen put the necklace that belonged to her on. Dexter wonders to himself if pairs really do survive better in the wild. 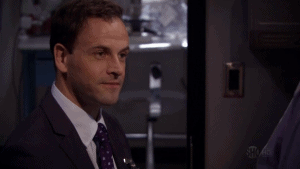 Jordan Chase visits Emily, who tells him that she told Lumen everything, including revealing Alex Tilden’s identity. He assures her that no one could ever take her place, and says that she made him what he is today. Chase’s next stop is Miami Metro; he’s there with his attorney to give a DNA sample. Chase sits down with Dexter to give that sample. He warns Dexter that Lumen is toxic and dangerous. Dexter tells Chase that he’s glad Chase didn’t touch any of the girls, because when the DNA test clears him, Dexter will be able to take care of him, with Lumen’s help.

At home, Dexter is preparing his knives and telling Lumen what Chase told him about her, and she walks in with her new gloves on. “I look stupid, don’t I?” she asks. “You look perfect,” he replies. She picks up a knife and practices her stabbing motion. Just as she’s doing that, Liddy returns to his stakeout truck outside and turns on the monitor to see her with the knife. “Oh my goodness,” he says.

Alex Tilden calls Chase and says he thinks he should get out of town, but Chase tells him to calm down and go about his normal routine to the letter. After he hangs up, we see that Chase is parked outside of Tilden’s house. He watches Dexter and Lumen enter, then calls Deb and tells her that Tilden just called his office in a panic looking for Harman about booking a flight. Chase starts his car and leaves, Deb and Quinn leave immediately for Tilden’s house. Tilden returns home to find the DVD of Lumen playing on his television, and she walks out in front of it. He goes to run, but Dexter knocks him out. He wakes up tied down on the table; he’s about to die. Deb and Quinn arrive at his house, but as it turns out, Dexter set up the kill room one house over, not in Tilden’s house, barely saving him from being caught.

‘Harry tried to mold me into the image of the monster he thought I was’ thinks Dexter upon returning home and putting away his knives. ‘He told me to flee human connection, so that became a way of life for me.’

Just then, Lumen walks in and takes her shirt off, and then his as well. She hesitates, touches his chest, then leans in and kisses him. They pause and then he kisses her back.

They wake up all tangled the next morning.

‘But with Lumen, I’m someone different. In her eyes, I’m not a monster at all.’