Check out Michael Mahoney’s recap here. Onto the recap. 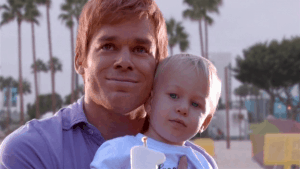 Dexter is preparing for the end. The end of Jordan Chase, that is. He vows to Harry that he will not let Lumen die, and just as he opens to the door to go find them both, the kids, their grandparents and Harrison’s nanny are all there to surprise him. The kids also ask to stay with him for the summer, and he says they can before hurrying out the door.

Deb informs LaGuerta that Chase’s plane was fueled up and ready to fly, but he didn’t show up. LaGuerta says they should issue a stake and notify, putting him under surveillance until they have enough to bust him.

Dexter calls Chase while he drives, who is also drving, with Lumen in his trunk. Dexter offers to turn himself over to Chase, but he declines and says he has what he wants. “Tick, tick, tick…that’s the sound of Lumen’s life running out,” Chase says. At least Dexter knows she’s still alive. Chase pulls up to an intersection, and there’s a man approaching the cars stopped at the light trying to sell his fruit. He recognizes Chase and hears Lumen’s banging from the trunk. The light turns green and he speeds away. He pulls over where no one can see him, opens the truck and knocks Lumen out.

Dexter arrives at work and while talking to Deb – who is rewatching the rape videos – he secretly slips Chase’s real estate listings into his bag. He starts looking through them, and Harry reminds Dexter to remember where Chase came from. His name used to be Eugene Greer. Dexter calls the office of county records to check for the property holdings in Greer’s name.

LaGuerta announces that they have an officer down – Liddy is dead. Quinn and Deb are running point on it, Dexter has to go as well to check the blood. Dexter and Quinn exchange an awkward glare as they get ready to head out to the scene.

Chase takes Lumen down a dirt road towards the River Jordan Camp. He drags Lumen out of the truck and down into the basement where all the films were shot. She has flashbacks to her time there as he brings her downstairs.

Dexter, Quinn, Deb, Masuka, LaGuerta and Batista all take the police boat across the harbor to the Liddy crime scene. When they arrive, LaGuerta confronts Quinn because Liddy’s last five calls were to him. She also notices that there’s blood on his shoe; it’s Liddy’s blood that dripped onto him when he was knocking on the van. Quinn decides he won’t talk without a lawyer, knowing how bad it looks. She then has an officer escort him back to the station.

County records calls Dexter back and lets him know about the River Jordan Camp, that went bankrupt 20 years ago. He gets the address and immediately heads there.

Jordan has Lumen tied up, and tells her that he “motivated” Dexter, and they’ll have to wait and see if he’ll come for her. He tells her she’s changed and has a different look in her eye. She kicks him as he gets close to her and tries to run away, but she isn’t able to get far.

LaGuerta explains to Deb everything they know about the Liddy case: Quinn was the one who rented the equipment in the van, and his fingerprints were all over it. Deb asks him about it, and he says that he didn’t do it but can’t say more than that.

On his way to the camp, Dexter argues with Harry. “Could you just trust me for once?” Dexter asks him. Just as he does, the car he’s stolen flips and rolls over. Dexter is just barely able to crawl out, and when he does, Chase is standing right there with a gun pointed at him.