Home
TV News
Did You Know that J.J. Abrams Directed an Episode of The Office? 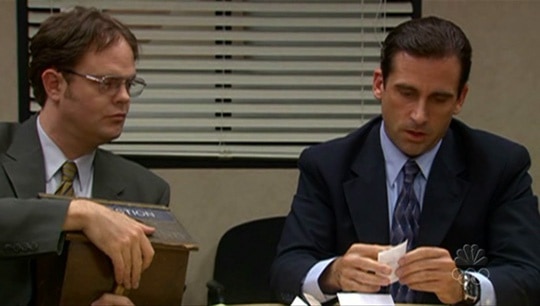 It’s important to remember that a lot of great directors out there weren’t always put in charge of blockbusters movies and weren’t always spoken of in the most famous of circles, or at the very least took the time to do smaller projects now and then. The Office had a very big number of directors during its run, it even had Jon Favreau and Bryan Cranston directing at one point. But J.J. Abrams, he of big blockbuster fame, managed to direct an episode that was a little monumental in that it saw Michael proclaim that he and Jan were together, and saw the end of Pam and Roy when she admitted to kissing Jim. The episode had plenty of other memorable moments to it, but the main point is that Abrams did manage to step into the director’s pool and take his turn with the show, and while a lot of people would claim that there was a vast difference between one director and another, and it’s usually true, the fact is that when it came to The Office the overall story tended to revert to form no matter who was taking over at the time. One would almost think that having so many directors over the course of the show would be extremely confusing, but somehow the program managed to push forward without too many massive changes that didn’t feel as though they were natural and would have happened under anyone else.

It could be that since The Office dealt with so many different personalities that it was easy for any given director to focus on what they wanted to and simply use whatever had been set in place before to work itself out naturally. Or there could have been something else, some other quality that made multiple directors possible over the course of so many years. In one regard it’s kind of natural to think that more than one director would be taking on a project such as The Office, but at the same time when one thinks of directors, it’s easy to see how they all have their own vision, their own style, and their own plans for something once they step on the set. That’s what would worry a lot of people since some directors might actually want to toss out what was working and use whatever they believed would be better for the show instead. Obviously that didn’t happen, at least not in such a blatant manner that people might have noticed. But if one really sat down to watch The Office from episode one to the very last episode they’d likely see enough differences between the seasons and even the episodes to reveal the varying styles of each director. It definitely takes someone that knows what to look for at times, but to be fair there are some very telling details if a person can pick them out. For a lot of fans, it was simple enough to watch the show and enjoy it, but for those that have to know every detail and everything there is about the show, who wrote it, directed it, and so on and so forth, there were bound to be hints here and there showing the style and overall quirks that are known to occur with certain people.

Abrams moved on pretty quickly after directing an episode of The Office and has since then been kept very busy as one movie after another has been brought to his attention as his fame has continued to rise. His contribution to the show definitely helped just as much as any other director since one can honestly say that there were events that led up to the episode he was responsible for, and he paired his efforts with those of others without trouble. The continuity of the show was one of the things that a lot of people enjoyed, but the comedy and the drama that came with it was a great draw for The Office as well. There’s been no doubt that Abrams is good with comedy, and with drama, so it wasn’t too hard to think that he managed to direct an episode of this show. The best part is that it might have been easy considering that with Abrams’ skill and the actors he was working with there was likely room for mistakes here and there, but their professionalism and his own would have probably made for a decent working environment unless something awkward happened. The actors of The Office were quite skilled in their roles and made each episode feel fully present when they were being filmed, and the fact is that the only type of director that could have really screwed things up on the show would have been one that had no business being there in the first place.