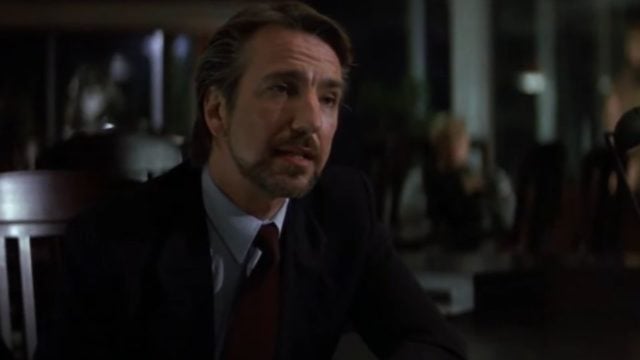 Since I see Die Hard once a year on the big screen at a special theater in Brooklyn, anytime there’s news about Die Hard I’m posting it here on this website.Â  As it turns out a major plot hole from the movie has finally been revealed nearly 30 years later.Â Â Â  Remember the scene where John McLane and Hans Gruber first meet?Â  Gruber (played by Alan Rickman) pretends that he’s one of the Nakatomi Corporation employees who managed to escape.Â  McLane (played by Bruce Willis) believes him as Gruber passes himself off as “Bill Clay,” an actual employee.Â  So what tips off Bruce Willis that Clay is actually Hans Gruber?

The obvious answer is his voice.Â  I mean come on.Â  The two have been talking on a walkie talkie for at least an hour so you’d think he’d know the voice by now.Â  But again, that’s the obvious answer.Â  Turns out that there’s a literal answer and it comes down to McClane’s cop skills.Â Â  Steven E. De Souza, the movie’s co-screen writer has revealed the answer to one of the film’s most nagging questions.

It all comes down to a series of deleted scenes, says De Souza, which served to establish that the faux-terrorists were all wearing fancy timepieces. In the original cut of the movie, Gruber and his team all synchronize Tag Heuer watches at the start of their heist; once McClane starts taking bad guys out, he quickly realizes that they’re all similarly equipped. In the original script, John notices “Bill” is wearing the exact same watch when he hands him a cigarette, which is why he hands him an empty gun a minute later in order to lure him into dropping the ruse.

Ultimately the watch bits were cut out of the film due to a continuity error.Â  The ambulance Gruber’s crew intend to use to escape the Nakatomi building was a late addition to the movie, and thus wasn’t present in the earlier “synchronize your watches” scene.Â  (Via Esquire)