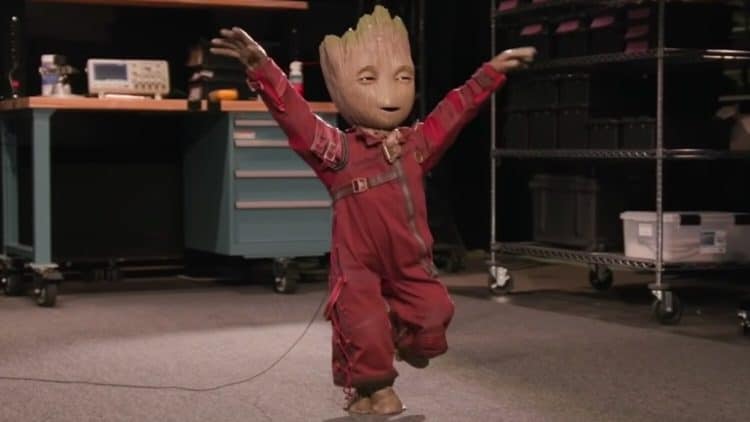 Is there anyone else that finds this a little bit creepy? This brings a lot of Chucky flashbacks when the murderous doll was being created and was shown behind the scenes. But a free-roaming robotic actor that thankfully still needs to be programmed and directed here and there is getting to a point when people are going to have to simply accept that technology is leaping ahead like Mario leaping across chasms, leaving people breathless in the process. It’s a pretty cool effect to be certain, but it’s also something that’s going to open up a great deal of discussion about robotics, AI, and the leaps and bounds that are being experienced. Plus, the practical use for this particular robot is questionable since Groot has grown up a bit since he was forced to wear clothing in the second movie unless this has been in development for a while and was just released recently. That would make a lot more sense to be certain, but one would still have to wonder what kind of use it would serve unless the structure could be given another skin and used in a different way. The character of Baby Groot was seen as one of the cutest characters in pop culture until Baby Yoda, aka Grogu, came along, and even then Gizmo from Gremlins had something to say about that since the cuteness factor became a dividing line between the various creatures and characters that have been created over the years. Each character has been given a great deal of attention by those that have been impressed more by their looks than their actual role in the story they’ve been featured in, but when one looks at the different characters it becomes obvious that the cuteness level kind of rises and falls as people get to know them a little better. For instance, Grogu’s egg-eating habit, and the fact that he ate a cave spider, kind of grossed people out, while the fact that Gizmo gives ‘birth’ to other mogwai by getting wet is kind of difficult to deal with.

Groot never stopped being cute until he grew up. Even when this little guy vomited after jumping through space in the second movie he was still more or less considered pretty cute since he also appeared kind of oblivious to the spew. But this creation kind of negates the cuteness factor simply because it looks a little disturbing. It’s not the lighting and it’s not the different size, since the creation is just kind of creepy since the fact that it’s walking about on its own and moving in different ways would be enough to freak anyone out. Maybe it’s just a matter of not trusting machines past a certain point, or maybe it’s something else, but despite the technological wonder of it all it’s fair to say that a lot of people might feel the same way since this creation is something that does kind of unnerve a lot of individuals that might feel that it’s another few steps until the Terminator days. Yeah, that’s a little too dramatic, but it’s also something that one can’t help but think is a very real feeling that a lot of people are getting these days since the advancing technology sometimes appears to be taking on a life of its own. It’d be interesting to find out just how many people think this is a great idea versus those that are a bit creeped out by it. Likely as not a lot of people would laugh it off since at the end of the day it is another robot that needs programming and direction to function, but the effect of the many movies that have shown us different is definitely taking a toll on us.

Some folks might want to ask how could Groot ever be scary, but it’s not so much the character as it is the fact that it’s a robot that’s walking around, something that shouldn’t be that unnerving but still is at times. There are plenty of reasons to just calm down and relax about it while admitting that it is a pretty impressive piece of work, but there are likely even more reasons to be freaked out by it that many people would come with on a whim. Yes, there are that many people out there that would probably see this as another step in the wrong direction when it comes to robots since the ongoing feeling that robots will one day take over is one that hasn’t departed just yet. The chances are pretty good that it won’t be leaving anytime soon since it’s very likely that people are going to keep it alive so long as they keep seeing clips such as this. Paranoia might not be entirely healthy, but some individuals might want to disagree.