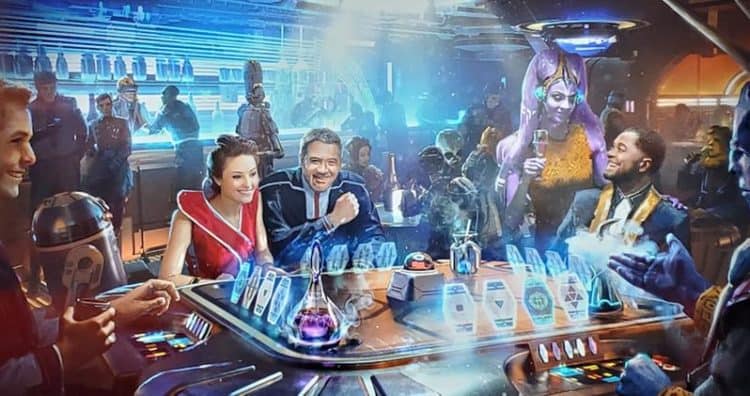 When it’s said that the Disney Star Wars Hotel makes it tough for a person to leave, it’s more or less saying that there’s simply too much to do and to be seen, and there’s no doubt that a refund would be slow in coming if one did decide to jump ship at any time. Much like a casino, this place is designed to keep a person entertained and too busy to even consider heading out, which makes sense considering that the experience costs around $1,400 per person. If anyone just scoffed at that price as ‘no big deal’ then it must be nice to think of such an amount as a trifling thing since a lot of Disney and Star Wars fans, especially those hit hard by the pandemic, would need to save for months if not longer to afford such a thing for their family. But anyway, with the kind of money being put into a trip like this one would think that most people would want to stick around for a bit since the experience and the luxury that comes with it would be worth it, as would the interactive experiences that come with the price.

If a person does want to leave early then Disney can’t hold them there, but they certainly give a person incentives as to why they should stay, and it’s likely that they attempt to be as persuasive as they can, and use other tricks that are still legal to get people to stick around a bit longer. In other words, it would take a truly no-nonsense attitude to get out of this place and let the staff know that any and all tricks wouldn’t be appreciated or effective when it came to keeping a person where they didn’t want to be. But imagining someone plunking this kind of money down for a trip to a hotel and then just leaving is about as real as seeing a live Wookie in Colorado.

There’s no doubt that this place is going to be decked out and fully ready to entice every last individual that walks into it when the place opens in 2022, but like anything in this world, it’s going to be another attraction. It will be an expensive one and no doubt is quite impressive, but it will be another luxury for people to spend money on in the pursuit of another life experience. those that can pay for the trip are bound to enjoy whatever Disney has provided and likely won’t start a trend by leaving early since even those that can afford this kind of vacation without any issue are bound to recognize that if one is paying for something they might as well get whatever joy they can out of it. With as much as Disney is putting into this place, it’s easy to think that there will be something that pretty much everyone can enjoy and that people won’t want to leave until their stay is up.

There are bound to be reasons why a person might NEED to leave once they get there, but wanting to is kind of hard to imagine simply because when one heads out for vacation the idea of leaving their destination once they arrive isn’t the typical idea. The Star Wars hotel already sounds like it’s going to be a lot of fun and will be something that visitors will be lining up for in due course. With everything that Disney has done with Star Wars in recent years, it’s still amazing to see what other projects they’re coming up with and how far they’re willing to push the franchise to keep the fans entertained. In a lot of ways, it’s pretty evident that the Mouse House got the better of George Lucas on their $4.1 billion dollar deal, though there were reasons that the deal happened in the first place that Lucas isn’t sorry for to this day. But one would have thought that Lucas would have added some add-on to the deal that might keep him around in order to advise and help guide the story so that he could keep his vision moving forward.

Hey, things happen. Hindsight is usually perfect, but in this case, it’s fair to state that Lucas somehow didn’t realize what he had and what Disney really wanted. The Mouse House wanted the franchise and the name, while Lucas wasn’t much of a concern to them since once the sale was made they had yet another big hit on their hands that they could exploit in any way they saw fit. To date, Disney has had their ups and downs with Star Wars, but it does appear that this hotel could be a very big and successful attraction if all goes well and people don’t feel pressured into staying.