Home
Doctor Who
Doctor Who 8.06 Review: The Caretaker 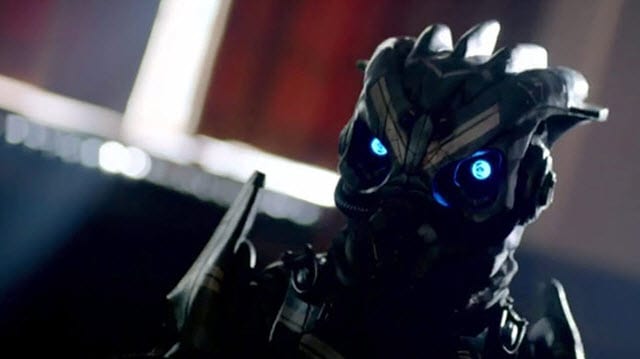 This week’s episode of Doctor Who is one that I have very mixed feelings towards because while I enjoyed a lot of aspects with it, I also got irritated at certain points.

Let’s start with the positive: the idea of the Doctor pretending to be a caretaker at a school is one of the best ideas ever because you know that nothing that he will do is going to be normal. But the genius thing about this episode was that it wasn’t really about him, it was more about Clara and her trying to handle her double life.

The monster of the week was a Skovox Blitzer and even though this isn’t one of the scariest things that we have seen on Doctor Who, I was still terrified. It was mostly because it moved so fast and aggressive even though look-wise, it shouldn’t be able to move at that speed. Maybe it’s just me who gets scared easily, but it was just so hard to see that thing in action.

Seeing Clara running back and forth between adventures with the Doctor and her romantic life with Danny was one of my favorite scenes in the whole episode. You keep thinking that at some point, she is just going to snap and go crazy on both of them. Luckily, she kept her cool and handled it masterfully throughout “The Caretaker”.

It was entertaining to see the Doctor be around normal people like the student Courtney Woods who can’t help being cocky in every single scene she is in. However, when she found out about the TARDIS and what it could do, I actually liked her. Maybe they can bring her on an adventure for an episode? That could be fun.

Later in the episode, Danny discovers some of the Doctor’s Time Lord-y devices and once he discovers that he got in the way to stop the Skovox Blitzer first time around, they start fighting. We see Clara getting in the middle of it and this is where the episode started to fall a bit for me.

Throughout all the seasons of Doctor Who, there has always been this concept where the Doctor and the Companion will have their bickering and arguments on various things. Normally, that doesn’t bother me because it’s usually so hilarious because of what they are arguing about. But in “The Caretaker” it was just way too much of the wrong argument which was essentially about Danny.

For as long as I have been watching Doctor Who, I have never wanted them to fight about someone who is a love interest for the current companion. The Doctor has a problem with Clara loving Danny because of reasons that have yet to be explained. I just thought it became way too much and I don’t like when an episode of Who becomes all about an companion’s love life.

I love that Danny finally found out everything about the Doctor as well as the TARDIS. Hopefully he will be in the TARDIS in the next couple of episodes, even though the Doctor doesn’t seem to like him. Overall, this was a mixed episode for me as it had a lot of good stuff in it while at the same time had some irritating things about it.