Home
Which Two Characters Might Be Getting a Doctor Who Spinoff? 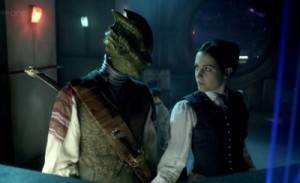 The most recent Doctor Who episode, “A Good Man Goes to War,” introduced a slew of new characters who came to the Doctor’s aid to wage war against Madame Kovarian (Frances Barber). Perhaps the most notable additions to the show’s cast of characters were Madame Vastra (Neve McIntosh) and Jenny (Catrin Stewart), a Silurian assassin and her human companion. The characters became almost instantly well-loved amongst the show’s fanbase, and now, it seems, there might one day be a spinoff with the duo.

“Obviously the first person to think about a spin-off was me, when I was writing “A Good Man Goes To War,” shared executive producer and showrunner Steven Moffat. “A Victorian Silurian? Her lesbian maid? Come on!”

Talking to SFX, Moffat declared that the spinoff had even received an unofficial greenlight from BBC Drama Controller Ben Stephenson.Â “He just said ‘…Yes!’. And then I said ‘I obviously don’t have time to do this…”

That doesn’t mean that we’ll have to wait to see more of Vastra and Jenny, especially after their reception by fans. “I think I might revisit them,” Moffat divulged. “They were great fun to write. . . I was pleased by the reaction to them, but not surprised. They really cut through as characters, given how little screentime they had. I certainly wouldn’t be averse to them returning. It’s just a thing that worked, isn’t it? I love that Victorian setting, and having kicked it out of [his other series, Sherlock, which reimagines the Victorian era detective in a modern setting]Â I can always kick it in somewhere else!”

I’d personally be up to possibly seeing Vastra and Jenny as companions after the inevitable departure of the Doctor’s companions, Rory (Arthur Darvill) and Amy (Karen Gillan), whenever that may be. It wouldn’t put such an enormous strain on Moffat’s schedule, and we’d get to see more of the duo (though just routine guest appearances would be fine by me as well). In any case, it should be interesting to see just how and when we see these new characters in the future.

Doctor WhoÂ will return in the fall with the episode “Let’s Kill Hitler.”