Home
Doctor Who
Doctor Who 5.13 "The Big Bang" Review
Prev Article Next Article

When you look at the brilliant darkness of “The Pandorica Opens,” you’re filled with despair about the fate of the Doctor and his companions. The Doctor was locked inside a giant box, Amy was shot fatally by plastic Rory, and River was trapped inside an exploding TARDIS. How could any of them have a happy ending?

In contrast, “The Big Bang” was that happy ending. The danger felt in the first part of the serial seemed to evaporate as soon as the Pandorica opened and Amy was revealed inside. It was all just a puzzle to put together, not a universe to save. 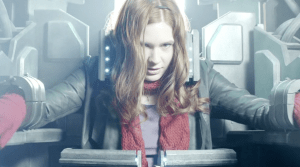 Of course, the universe did have to be saved, but it was done so rather quickly and with a lot of technical mumbo-jumbo between the Doctor and River. The entire universe-rescue plot was a little boring, actually, but the characters made the episode one of the best ever.

In a way, “The Big Bang,” shows just how different Steven Moffat is from Russell T. Davies. In the Davies era of who, the entire episode focused on the plot, and the characters were just means to an end for the plot. There were some heartbreaking moments in every finale, of course, but that was the limit of Davies’ writing’s emotional range.

The difference between that and Moffat’s writing, on the other hand, can really be summed up easily: scope. Sure, the stakes in “The Pandorica Opens”/”The Big Bang,” were the same as they were in any Moffat finale: the end of the universe/world/time. That was typical of the show, of course. But while Davies chose to deal with his finales by showing devastation on a massive, epic scale, Moffat only ventured beyond his core cast one time, when showing the galaxies exploding around the Earth at the end of “The Pandorica Opens.” The rest was entirely focused on the Doctor, Rory, Amy, and River.

Also unlike Davies, Moffat’s finale showed that he’d known what he was doing for a very long time. While clues like “Bad Wolf” and “Vote Saxon” were shown throughout the season during the RTD era, Moffat actually included scenes in previous episodes that didn’t come into play until the finale. Take, for instance, the scene with the Doctor and Amy in the Byzantine. Fans called continuity error when they saw that the Doctor was still wearing his coat for a scene. Gotcha! Of course he was!

And not all the mysteries were cleanly answered, either. Who was behind it all? We still don’t know, but the Doctor’s acknowledgement of this fact seems to mean that we’ll be finding out in the future. Such lack of clean, tied-up-with-a-bow resolution also is a clear indicator of the difference between Davies and Moffat — Moffat knows that not all mysteries can be answered in a two-part episode. 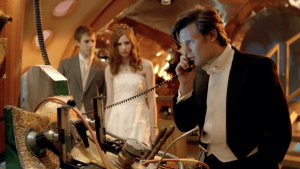 And don’t even make me mention the wonderful ending to the episode. While Rory and Amy did eventually get married, they did not leave the Doctor as was expected. Usually, marriage spells the end of adventure — “Amy’s Choice” was an episode that seemed to say that after marriage, Rory and Amy would settle down in a nice cottage somewhere and live out their lives in mellow peace. Not so, it turned out, surprising even the Doctor. Having a married couple aboard the TARDIS will definitely change the dynamic of the show next year, and I honestly can’t wait to see more. If Karen Gillan and (the fantastic) Arthur Darvill (as Mr. and Mrs. Pond, because that‘s how it works) aren’t both credited as regular companions, I’m going to be very disappointed.

Overall, “The Big Bang” was a great conclusion to a great season, and you can expect to see a review of the season in the near future. A 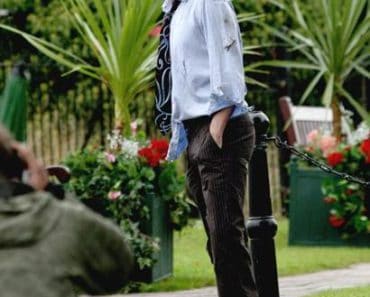