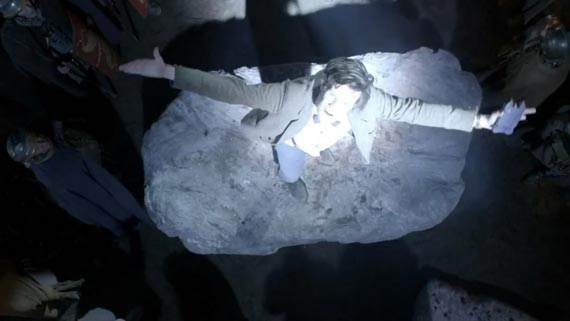 Every season of Doctor Who has an overall arc, whether it’s “Bad Wolf” for season one, “Vote Saxon” for season three, or, most recently, the cracks in time for season five. Nobody knows where the cracks came from, but they have the ability to erase people straight from history– as if they never existed!

Take for instance Rory, Amy Pond’s boyfriend. The poor guy was not only shot to death by a Silurian in the denouement of “Cold Blood” (part two of the Silurian episodes), but he was sucked into the time cracks and was forgotten by everyone but the Doctor (because the Doctor’s a complicated space-time event).

These cracks have been linked to something called the Pandorica, which the Doctor seems to believe is just a myth, despite being reminded of the mysterious thing by Prisoner Zero in “The Eleventh Hour” and by River Song in “Flesh and Stone.” But, as we know, the Doctor can be very, very, wrong, and in the case of the Pandorica, he most certainly is.

Why? Well, the penultimate episode of the season is called “The Pandorica Opens.” I don’t know about you, but that seems like pretty solid evidence to me. There are also some photos from the episode. Now, photos are usually placed in the gallery, but these were absolutely just too spoilery for me not to keep them all to myself.

The Pandorica appears to be a giant collection of all of the Doctor’s worst enemies. That’s right — the Daleks, Cybermen, Sycorax, Silurians, Sontarans, pilot fish, Judoon, and the Hoix are all going to appear, as well as creatures from spinoffs Torchwood and The Sarah Jane Adventures. You can see all these creatures in the photos below.

However, there appear to be Roman soldiers around too, and — if I’m not mistaken — that’s the back of Rory’s head in one of the shots. Could it be that the Pandorica comprises of everything that’s ever been sucked into a crack in space? Could it be that Rory’s alive and can be rescued? Let’s hope so.