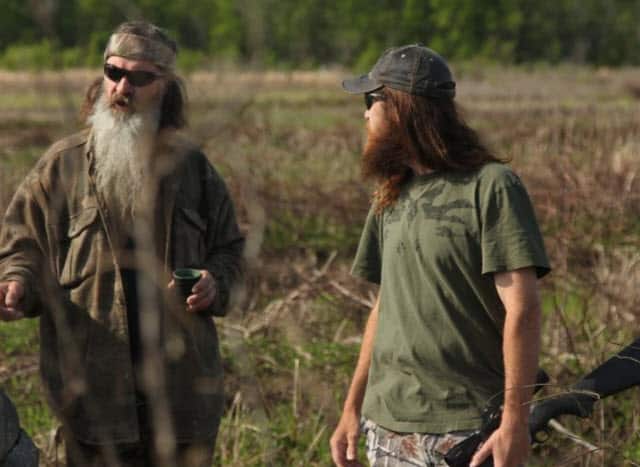 Well,Â Duck Dynasty has to receive some kind of medal for the remarkable level of consistency it has achieved over 6 seasons. Despite the recent snub in the Emmy nominations (Wahlburgers?Â Really?) theÂ Duck DynastyÂ crew delivered yet another strong episode this week. Of course there is a standard of quality we fans expect, but they almost always deliver.

In one story: Jase and the boys go searching for crawdads in one of their duck blinds, only to find a gator (just a small one, but it makes no difference to Godwin) and a LOT of bugs. So, it’s time to have the annual cleaning of the duck blinds. Cleaning the duck blinds is like their version of paperwork, according to Jase. I’d have to agree, because it did NOT look fun. Before long, however, Jase gets sidetracked into his vendetta against ants (after recanting a traumatic childhood experience involving Miss Kay and a muffin party), and tears down half the forest. Phil is not the least bit amused by this, but when they decide to move the duck blind, he decides he can live with it. Highlights of this poltline: Godwin eats an old jar of pickles they find in the blind, and Godwin throws up later.

Meanwhile, the rest of the Robertson clan is hosting a car wash for charity at their church. Of course, it isn’t going very well. Willie thinks he can help (using his oh-so-popular “business acumen”). Â Of course, Willie is no help at getting anyone but more Robertsons down to the car wash, so that’s when everyone’s favorite crazy uncle, Si, intervenes. He decides that someone should be “sign flipping” on the road, and that should be him. He’s terrible at it (or at least much worse than the guy at Little Caesar’s in my hometown), but the idea works. He’s brought in the business, and the church and charity were all (I’m sure) extremely grateful.

Here are some of my favorite quotes from the episode:

“They’re so good, they turn Godwin into Bubba from Forrest Gump!”- Jase, on crawdads

“They’re pickles, they don’t never go bad”- Godwin (bet you can guess how that ended)

“Are you talking about Cast Away or Dennis the Menace?”- Jase, after Godwin botched a movie reference in relation to a volleyball.

All in all, another fun episode ofÂ Duck Dynasty.Â People get very wrapped up in awards season, but sometimes they forget that TV is supposed to be fun.Â Duck Dynasty has never forgotten that, and if there’s one thing they do well week-in and week-out, it’s have fun! What’d you think? Another fun week for you and the Robertsons? I’d love to hear your thoughts!