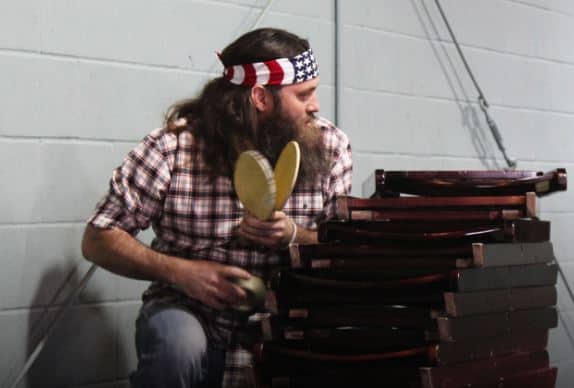 Just when I begin to think that I might need a break fromÂ Duck Dynasty, it comes around with the funniest episode I have seen in a long time. This show is at its absolute best when it explores the relationships between the Robertsons, and how they have grownÂ and continue to grow in those relationships. This episode explored that element in one of my favorite ways. As Winston Bishop would say: “Praaaanks!”

This week onÂ Duck Dynasty: Willie, Jase, and Jep re-ignite their 30-year-old prank war, only to be “punished” by Phil. As their punishment, they must help Alan with various tasks around the church. Meanwhile Korie arranges an art class at the church, for everyone, but mostly for Miss Kay, who dreams of being an artist.

I’ll talk about this first and get it out of the way: The painting story was a little silly. It was still amusing, and a great piece of the show, but by and large, it was not the most interesting. When they added Si to the art class, that helped quite a bit, as he was able to bring some comedy into the other half of the episode. By and large, however, the art story just didn’t work for the show. I wanted it to, but it didn’t.

The prank war, however, was another story (both literally, and for my purposes within the context of this review). Perhaps it was the fact that every single thing the Robertson brothers did in this episode reminded me of the brothers I grew up next to. As we got older, there was absolutely nowhere we could go without creating a bunch of silliness in our wake. Anyone who has brothers even remotely close in age will surely understand this. Willie, Jase, and Jep perfectly embodied brotherly love, and showed that brothers make the best friends. The whole bit with their “punishment” from Phil was great, too. I remember being sentenced to time served with my brothers growing up, and they almost always ended in goofy pranks or giggle fits. The Robertsons, and the producers of the show, have created an episode that showcases real relationships and how they function, and it’s a wonderful sight.

– “You better take it easy there Kool-Aid man.”- Si, as Willie was pranked into knocking down the door

– “Did you get me batteries for my remote?” – Miss Kay, clearly underestimating the surprise she was about to receive

– “That game ended the day I had to stick my head in the toilet.”- Jep, describing the “do everything we say” game he played with Willie, Jase, and Alan

– “Low sodium meatless spaghetti sauce?” “Throw that away!!”- Willie and Jase, trying to improve the quality of the donated food

– “Oh I’m laughing, but on the inside.”- the always deadpan Phil, after he was victim to a “prank” of sorts

– Phil on the whoopie cushion, by the way, was the best part of the episode.

Well, that’s all I’ve got for you this week. Tune in next week. Same duck time, same duck channel, for more coverage of Season 8.

What did you guys think of the episode? Let us know!