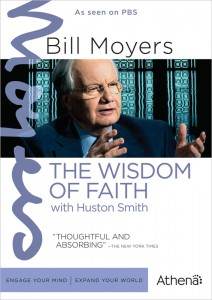 In his most recently released DVD set, journalist Bill Moyers explored the intertwining nature of religion and government (read my review of Bill Moyers: God & PoliticsÂ here). In the new set, Bill Moyers: The Wisdom of Faith with Huston SmithÂ (out on DVD from Acorn Media September 20), Moyers turns his eye entirely upon religion.

As the title indicates, Moyers interviews comparative religion professor and Religions of Man authorÂ Huston Smith in the set. Smith is an immersive speaker, slowly and deliberately crafting interesting explanations and pointing out connections between religions, which he says are, at their core, all the same.

Religion is handled in an interesting way with this program. It’s treated in a way that’s both secular and reverent, as though it was a beautiful work of art that should be appreciated, though you don’t necessarily have to subscribe to it. “The soul that beholds beauty becomes beautiful,” Smith quotes in the first episode, and that’s really one of the major tenets of the set. You don’t have to be a believer to appreciate; atheist or Christian, Jewish or Buddhist, you’ll find little to disagree with in this set.

FIve episodes are included: “Hinduism & Buddhism,” “Confucianism,” “Christianity & Judaism,” “Islam,” and “A Personal Philosophy.” The set also includes a booklet exploring universal aspects of religion (such as commandments), and gives examples from various religions. Special features in the collection include on-screen biographies of Huston Smith and Bill Moyers, as well as a gallery of religious images.

You can order Bill Moyers: Wisdom of Faith With Huston Smith on Amazon.