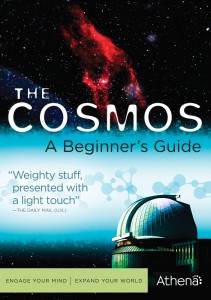 I usually like Athena documentaries. Discovering Hamlet was a brilliant documentary that really gave me an insight into how stage productions work. All of Bill Moyers’ DVD sets released through the company have been cerebral comfort food that made learning about the Constitution an osmotic, almost soothing experience. And The Genius of Design was a documentary that frenetically whizzed me through how things I use every day are created. I had to work to keep up, but I really loved doing so.

But with The Cosmos: A Beginner’s Guide, there’s surprisingly not much to love. With this set, which was released by Acorn Media on March 29, the information is still good, there’s no question. The research here has been done just as well as any other BBC documentary, and there’s no doubt you’ll learn something from the six-episode set. The problem is, it’s condescending.

There’s nothing comedic about the “light touch” that the U.K.’s Daily Mail raves about on the set’s cover. In fact, I wouldn’t even call it a light touch. It’s more of a dilution of simplicity that made me cringe from almost the moment the series started. The series is essentially a Discovery Kids special with slightly more complicated subject matter. Sure, they’re talking about the probabilities of finding life on Mars, but the woman doing it is talking slowly and using a preschooler’s toy as a prop, explaining it to us as though we’re really slow. Some people might like that (especially grade-schoolers), but I find it unbearable.

I’m not claiming to be anything other than the “beginner” that this set is apparently intended for, but this set made me feel like I was already a grade or two ahead. The set fluctuates between how condescending it is: it actually gets bearable toward the middle of each episode, as the hosts change up. I found myself enjoying stretches of the show, where the condescension simmered down to a tolerable level.

The question for prospective viewers is whether they can handle it. Perhaps if their ego wasn’t quite as big as mine, someone could learn from Cosmos and thoroughly enjoy it. I learned from Cosmos, but didn’t.

Get the set on Amazon.