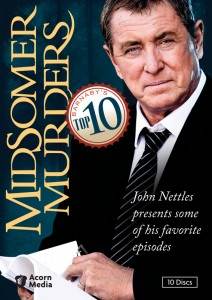 Midsomer Murders, as the years have gone on, has been a hit-and-miss affair. Some of the show’s mysteries are absolute crackers, while others fall a bit short. Such is the nature of television, especially long-running shows like Midsomer Murders.

For those who prefer to see the hits and not the misses, Acorn Media has released a set titled Midsomer Murders: Barnaby’s Top 10, effectively a ‘greatest hits’ of the show thus far. The episodes in the set were chosen by the actor who portrays Barnaby, the brilliant John Nettles. The timing of this release is appropriate; Acorn Media, who releases the show on DVD in the US, are close to putting John Nettles’ final episodes on DVD for the fist time. Nettles retired from the series in February of this year.

The episodes, arranged into categories, are all excellent outings from the series. The show’s first episode, “The Killings at Badgers’ Drift,” is included, as well as nine other outings from Nettles’ career, including the fantastic “Blue Herrings,” my favorite of the set.

Barnaby’s Top 10 hit DVD on October 4. The set is definitely worth getting for anyone looking to get into the series for the first time. Naturally, the set, even with its episode introductions from John Nettles, is completely unnecessary for anyone who owns the show’s older seasons on DVD. For the uninitiated, though, it’s a great set. Order it on Amazon.