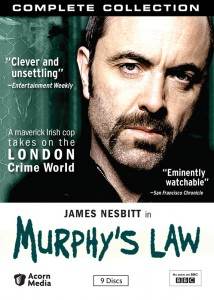 Murphy’s Law is coming to DVD in two ways on August 30. There’s the Series 4 & 5 set, which you can read my review of here. For completionists, there’s also the complete series set, a nine-disc collection that features all five seasons of the British hit undercover cop drama.

James Nesbitt stars in the series as Tommy Murphy, an Irish cop who lost his daughter in a hostage situation before the series began. He’s moody, naturally, but doesn’t give so much weight to the part. He adds lighthearted moments, giving a layer of depth to a character who could have been easily two-dimensional.

Nesbitt (who will appear as Bofur in the upcoming film The Hobbit), carries the series throughout all five seasons. It makes sense; after all, the role was created for him by novelist Colin Bateman. But as he progresses through the series, Nesbitt’s portrayal changes. Murphy becomes wearier, sadder, and it all builds up to the strangely appropriate conclusion to the series. Nesbitt’s brilliant, though; his performance is one of the finest I’ve ever seen in a television series.

The series itself, which sees Murphy go undercover to catch bad guys, isn’t exactly uniform. The first two series show Murphy tackling cases by the episode, while series 3 features a slightly too long story stretched across six episodes. Series 4 and 5 finally get the formula right by having Murphy tackle cases over three episodes each. Those last two series have the right amount of buildup and devastating emotional impact needed.

The thing you should be warned about Murphy’s Law is that, as a whole, it isn’t a happy series. It’s dark, gritty, and seems to adhere to the adage it was named for: whatever can go wrong, will. It’s not a happy profession that Murphy’s involved in, and nothing’s ever tied up with a nice little bow. People die. It gets harder and harder for Murphy to live with himself. But even though there’s no silver lining, no happy trim to the story, it’s worth watching as a character piece in the same way that Breaking Bad is; you know the ending isn’t going to be happy, but you watch it just to see what it does to the main character. That’s what’s worthwhile about watching.

You can order Murphy’s Law: The Complete Collection on Amazon.