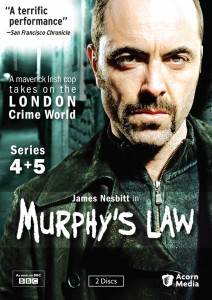 When undercover cop Tommy Murphy focuses on one case for a span of three episodes, brilliance occurs. The mystery doesn’t go on too long, as it did in the six-episode, one-case series 3. For series 4 and 5 of Murphy’s Law, out on DVD from Acorn Media August 30, Murphy tackles some pretty nasty stuff. Series 4 sees him trying to take down a drug empire headed by an Irishman and his sadistic brother, while series 5 focuses on Murphy’s hunt for two missing police officers. It’s tense, gripping, and it never quite pans out the way you would expect.

Murphy’s not just a badass in the series. He’s got a heart, something that the show doesn’t shy away from. Series 4, for example, sees him juggling his undercover activities with his struggling to cope with his mother’s Alzheimer’s, which has robbed her of her sanity — and the ability to recognize Murphy as her son. Each series ends with moments that might just move you emotionally, if it doesn’t bring you to tears.

James Nesbitt (one of the dwarves in the upcoming Lord of the Rings prequel The Hobbit) stars in the series as Murphy, and he brings the perfect balance to the role, and thus, the series. The supporting cast is good as well, though Nesbitt naturally overshadows them in every scene he’s in.

Fans of Game of Thrones might find a particular interest in this set; Liam Cunningham, who has been tapped to play Davos Seaworth in the HBO show’s second season, has a starring role in the show’s fourth season. It’s a perfect example of his intense acting and depth.

If you have the previous sets of the series and it’s uniformity you want, you’re unfortunately out of luck. While series 3 came in a cardboard slipcase with two thinpak DVD containers, The series 4 & 5 set is set up more like a standard release in a typical DVD case with a slipcover. If you don’t have earlier sets of the series, I’d suggest buying a copy of the complete series set, which is out on DVD from Acorn on August 30 as well. You’ll be able to read my review of the complete collection next week.