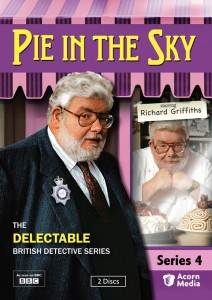 Mostly, Acorn Media’s DVD releases have defied the cliched perception that Americans have of British mysteries. That misconception, that British mysteries are essentially stuffy, out-of-touch old people slowly solving scandalous murders, has been mostly proven untrue by the company’s magnificent output (Single-Handed is one of the most brilliant mystery shows I’ve ever seen, and doesn’t fall into any of those categories).

Pie in the Sky, however, seems to embrace the cliche so fiercely that it might have been made with those misconceptions serving as law. Starring Richard Griffiths (Uncle Vernon from Harry Potter) as Henry Crabbe, a detective with a fondness for cooking, the show seems to fall into what I regretfully must call the “stuff only old people would enjoy” category.

I realize that even mentioning that category has automatically created in the minds of some that I’m a narrow-minded adolescent who only likes to watch things that came out in the past five years, provided those have gunfire and cool explosions. I assure you this isn’t the case. Shows don’t have to be dramatically exciting to elicit a good review from me, but they do have to be at least somewhat interesting. I found myself dozing off before the end of the show’s first two-part mystery. The stilted dialogue and two-dimensional characters didn’t really help.

Series 4 of Pie in the Sky, which hit DVD on January 25, doesn’t require viewings of past series. Of course, it remains with you on whether you’d like to purchase the set (which contains no special features), though I wouldn’t recommend it, especially when compared to the greatness of Acorn Media’s other output. Settle down with some Single-Handed instead.