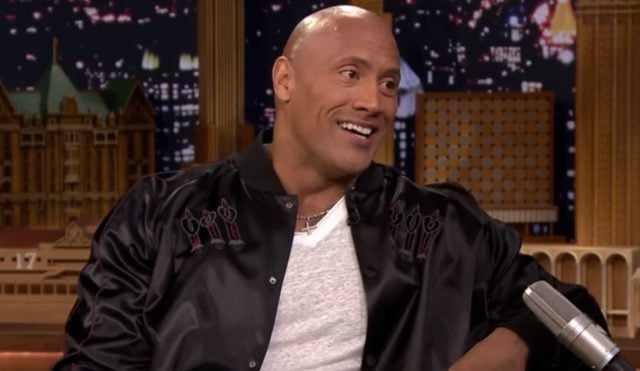 Just as talk has been mounting up at a possible impeachment of our current president Donald Trump, so too has talk about Dwayne “The Rock” Johnson running for president in 2020.Â  In fact, in a new poll conducted, we see that Johnson would beat Donald Trump by nearly five points in a new election.Â Â  No, seriously.Â  This is real folks.Â  We’re not kidding.Â  As scandals mount in the White House, people are look ahead to 2020 and trying to find someone to unseat Trump.Â Â  Will that person be a former WWE wrestler and current highest paid actor in Hollywood?

Johnson stopped by The Tonight Show to chat with Jimmy Fallon who of course asked him to address the rumors.Â  The Rock told host Jimmy Fallon that he’s been “incredibly flattered” and “blown away” by the positive response to his maybe running for president. But why him and not, say, Tom Hanks? “A lot of people want to see a different leadership today,” The Rock explained. “Or, I’m sorry, a better leadership today.” He even has his talking points down pat: gets up early, hard worker, spends time with the troops, loves his family, “more poise, less noise” (is that his “Make America Great Again”?). But “three-and-a-half years is a long ways away,” The Rock teased, “so we’ll see.”

Check out the full interview below: