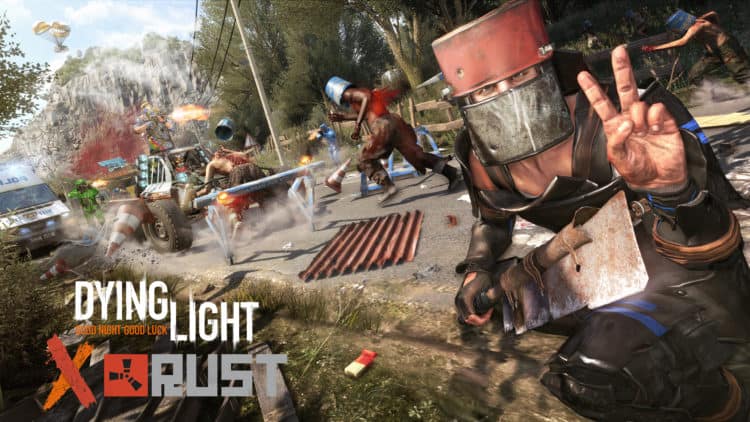 Earlier this week, Techland announced a collaboration with Facepunch Studios that caught many player completely off guard. The hugely popular multiplayer survival game called “Rust” has made its way into Dying Light for a limited time in-game crossover event. Yep, that’s right. Dying Light has now crossed over with several other games including Unturned, Left 4 Dead 2, even Chivalry Medieval Warfare, and now that list includes one of the most popular games currently on Twitch! So what exactly does this Dying Light x Rust crossover in-game event entail for Dying Light? Why should you participate in this event ahead of Dying Light 2? Well, among some cosmetics there’s plenty of other brand new features to take advantage of in this Dying Light in-game crossover with Rust!

If you didn’t know, Rust is a massive game that has become immensely popular and synonymous with many Twitch streamers including Corpse Husband, Shroud, Valkyrae, xQc, and many more. According to Wikipedia, “The objective of Rust is to survive in the wilderness using gathered or stolen materials. Players must successfully manage their hunger, thirst, and health, or risk dying. Despite the presence of hostile animals such as bears and wolves, the primary threat to the player is other players due to the game being solely multiplayer. Combat is accomplished through firearms and various weapons, such as bows. In addition, vehicles controlled by non-player characters will occasionally roam, attacking armed players. Rust features crafting, though initially limited until the discovery of specific items in the game’s open world. To stay protected, players must build bases or join clans to improve their chance of survival. Raiding as a clan is a major aspect of Rust. Rust supports modded servers which can add additional content.” While Rust is certainly not the only survival game on the market, it definitely brings a whole new meaning to the term, as the game pits player against player in a seemingly never-ending battle for superiority and territory. Rust is definitely not a beginner friendly game as it heavily favors players who are either part of a larger group, or have invested hundreds and thousands of hours into the game, to build up their arsenal of armor and weaponry.

So, you’ve heard a bit about what Rust is, but what exactly is available in this Dying Light x Rust in-game crossover? Well, Rust-themed weapons and skins, like the Heavy Plate outfit, are currently available within the world of Dying Light, including the Salvaged Cleaver as well as the Rust Assault Rifle. However, while new weapons are certainly a big part of this crossover, that’s not the only thing that’s included. Within this crossover, there are brand new enemy types including Rust Outpost Scientists and a new Bucket Helmet zombie type. You can also complete local and global objectives throughout the game in order to unlock Gold upgrades and C4 Dockets, specifically Gold Fire, Gold Freezing, and Gold Poison C4 Dockets. Not to worry though, if you’re on a budget, you can still access content from this Dying Light x Rust crossover event with the free Rust bundle for Player and Buggy skins inspired by Rust itself. The free Rust bundle also includes the previously mentioned Rust Assault Rifle and Salvaged Cleaver, but also a Custom SMG.

When is it available?

You’ll have about a week to participate in this Dying Light x Rust crossover, as the event lasts from April 19 until April 26, 2021 at 10AM PDT. While this may seem kind of like a “blink and you’ll miss it” event for some, this should mean that the objectives that you need to complete for the Gold upgrades and C4 Dockets shouldn’t be all that time consuming to complete.

Where can you play?

Well, unfortunately, even though Rust is now available on consoles such as PlayStation 4, Xbox One, and PC, you’ll only be able to access the crossover with Facepunch Studios’ massive hit if you play Dying Light on PC.

While I certainly wasn’t expecting anything even remotely close to a crossover event like the one between Dying Light and Rust, it’s certainly nice to see that Techland is still supporting Dying Light even 5 years after its initial release, and well into the development of Dying Light 2. Even though Dying Light 2 has been significantly delayed, we do know that the game still exists and will be making its way to us as soon as it can. After that, I’m sure we’ll probably see a pretty clear flat-line for Dying Light as the developers shift their ongoing focus to support of the sequel, but until then, I’ll take any new Dying Light content that I can.