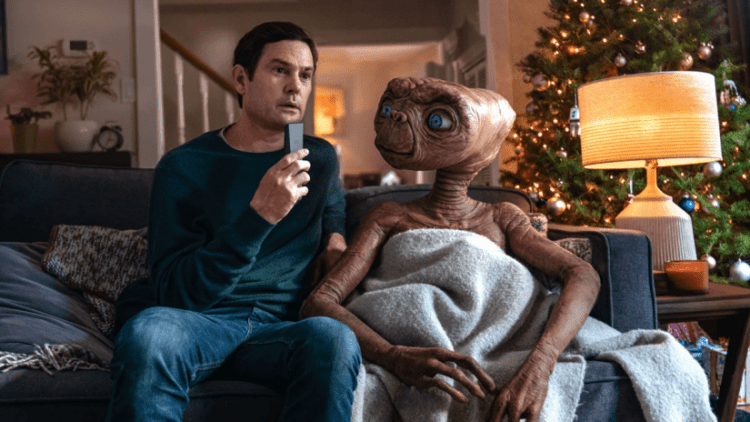 That’s a lot to do just for a commercial, but then again this day and age you can imagine that some companies are really feeling the need to go all out in an attempt to get people’s attention and are willing to dump money by the truckload into one spot after another. This one goes for the serious nostalgic hit as E.T. is seen to reconnect with Elliott for a short, two-minute spot that shows the iconic alien appearing to Elliott’s kids at first, which of course elicits a scream that’s over and done with in record time because…reasons. Dade Hayes of Deadline has a little more to say about this in his own words. It’s safe to say that kids these days aren’t quite as unnerved by the unknown as we were back in the day, and so on and so forth with the generations before. Of course given that Elliott comes running it’s safe to assume that E.T. was assuming he had the right place, somehow. But how in the world would Elliott explain this to his wife and kids? “Honey this is the alien I met when I was a little boy and we went on adventure with eluding government agents before he flew off in his spaceship.” It kind of sounds like something a person would cock an eyebrow at wouldn’t you think? But the idea that technology has changed so much since the movie came out in 1982 is very telling, but also offers up a lot of questions that the heartfelt advertisement isn’t about to offer obviously.

It would seem that no matter how advanced humanity gets and how cutting edge our technology is, aliens seem able to find a way around it and go without being detected because….writers. Plus, when you really get down to looking at the disparity between alien technology and our own it’s not too hard to think why law enforcement and other clandestine agencies might think that they pose a threat since we have yet to discover just how to send more than a few people on a limited mission to space, while imagination has allowed aliens to traverse the various space lanes with impunity. To think that any of them would simply visit earth to say ‘hi’ to an old friend is kind of hard to imagine, but then E.T. and Elliott had a pretty strong bond that kept them together and would be bound to remain after so long it seems. You kind of have to wonder just what E.T. might think of earth at this point since a lot of things have changed in a big way since he was here last, especially when it comes to the simple luxuries that people have in their homes. There was no such thing as the internet in every home back in the early 80s, heck a lot of people didn’t have more than one TV in their homes, and now we have all sorts of devices and technology that’s used to make our lives simpler. For all that though E.T. is still miles and miles beyond us, as the aliens’ technology seems to be the type that dwarfs any human accomplishment rather easily.

Something like this seems to indicate that those in charge might be thinking about a return to the old movie and the idea that E.T. might actually make a return. But why would he come back? The original movie saw E.T. and a few of his fellows taking samples from the local fauna as what was obviously part of a mission that went awry when they were discovered by government agents. So why would he come back though? Maybe he and his people were set to check on earth’s progress and see how far they’d come. Whatever it might be, if there actually IS an idea to revive the movie, it would have to be something quite unique and worthwhile since E.T.’s people didn’t seem all that aggressive, though they do have some very interesting abilities such as their ability to heal others and to revive dead plant life. Plus, the telepathic link they can share with others is kind of interesting even though it ended up getting Elliott in trouble during the movie. All in all making another E.T. movie might be kind of interesting and it would be keeping with the reboot and remake trend that’s been in effect for a while. Whether anyone is brave enough to do it at this point is hard to say, but ambition is usually running pretty high in Hollywood so it’s fair to say that there might be a few individuals that would want to give it a go. As Kevin Burwick of MovieWeb has written though it’s not likely that we’ll ever see a sequel per Drew Barrymore.

“Nope, we’re never going to make a sequel, it’s just as it is. That was his (Steven Spielberg’s) philosophy, so who was I to question it?”

As far as the advertisement it’s a nice bit of whimsy since seeing E.T. once again might spark a lot of good feelings in some people considering that it’s one of the more classic movies of the 80s, and one that people still enjoy.