Home
Movies
Ebola Rex Vs. Murder Hornets Trailer is Worth a Watch 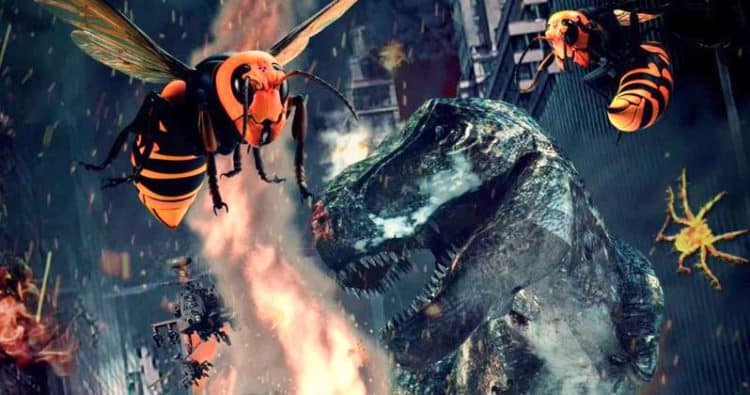 Is this a reminder of 2020? Because we really don’t need a reminder of 2020 and if it’s a reminder of 2020 then it might as well have stayed in 2020. Okay, now that the rant is over we can get down to trying to understand why someone would be bringing a bit of the aftermath of one of the worst years we can remember to life and pairing it with something else that we didn’t particularly care about while pairing that with a creature that some people think scientists are trying to recreate, a T.Rex of all things. Or maybe it would be E.Rex in this case since Ebola Rex vs. Murder Hornets is just over the top enough to make people roll their eyes and still think that it’s worth watching. Truly, schlock movies that are there basically because someone got a bug in their ear to make a movie have been embraced over the past few years and it’s kind of impressive, to tell the truth since it’s not exactly something that anyone could have said with any certainty was going to happen. But it has been happening with an increasing amount of success since just getting noticed is enough, but being put on the internet where hundreds to thousands to millions of eyes are going to be seeing it is even better since it might actually gain a little bit of traction and earn back its meager budget in a couple of months or less. It’s amazing what can be done with technology, and by that I mean the fact that anyone with even a quarter-baked movie idea can get online and attract viewers.

It’s not an insult really to call a movie like this quarter-baked since like it or not the low, non-existent budget means that the effects are going to be about as cheesy as they can get and will look like something that might be adequate for an adolescent’s horror hour, but for some viewers, it might bring back a few bad memories since ebola at one time, and still, for the most part, has been a big issue that people don’t want to deal with or hear about or even think about in a lot of cases, and murder hornets are a lesser problem that could become a big problem if they were found to be appearing in greater numbers throughout the US since the size of these things alone is unnerving and apparently, their sting is insanely painful and could kill someone if they were stung enough times. That could be said of a lot of insects, especially since some folks react differently to insect stings and bites, but from what’s been said of the sting that these hornets can deliver it’s beyond the type of pain that any normal-sized hornet can deliver, at least as far as anyone knows.

But wonder of wonder, the murder hornets in this movie are the size of cars and buses and bigger, oh my, which means that they won’t just sting, oh no, they’ll IMPALE people. And who knows what the Ebola Rex’s deal is? But if you thought these titans were the only scary parts of the movie, think again. Apparently, there’s also a zombie outbreak and a bunch of firenadoes that have flaming spiders in them that are falling to the earth and causing all kinds of havoc. This is like Jurassic Park, Deep Impact, Arachnophobia, and 2020 all rolled into one super-sized horror burrito that someone’s going to need the nerve to take a big chomp out of since all this stuff happening in one movie feels like it’s going to cause a lot of people to sit down, watch the movie, and then sit there for a while at the end thinking about what they just watched. Just talking about and thinking about the movie is making me wonder how in the world did the folks working on this movie come up with so many disasters for one picture? Visions of a dartboard and various pictures that have been pinned to said board come to mind since this is about one of the only creative processes that really makes sense when thinking of how this thing was designed.

All the same, one can just imagine that there will be plenty of people that want to watch this movie when all is said and done, as it will be coming out on March 1st for people to watch and will then be headed to DVD and VOD soon after. It’s fair to say that it’s likely going to be gracing a lot of DVD shelves since like it or not, this type of movie is quickly becoming a favorite of many people that happen to enjoy the campy humor and special effects. Hey, to each their own and all that.