Home
TV News
Echoes: An Inside Look at the New Pilot 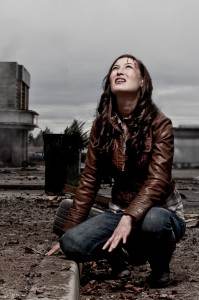 Two weeks ago, I had the privilege of visiting the set of the filming of the pilot presentation for Echoes (a working title). This pilot presentation is comprised of several momentous, and strongly contrasting, scenes from a full pilot script written by Ken Kabatoff and Mark Savela. Today, the picture on the presentation was locked, which means the editing is finished and the rest of the post production process — VFX, sound mixing, color correct — will begin.

You may still be wondering what exactly Echoes is, exactly, so let me try and explain. Following the cancellation of Stargate: Universe, a show on which they both worked, Mark and Ken began the process of penning a new pilot script and sketching out the backgrounds of the characters and world they were creating in a document referred to as their ‘Bible’. One thing I’d like to make clear right now: while many of the crew, and a two of the cast members, did work on SGU, Echoes is most assuredly its own entity.

Echoes tells a post-apocalyptic tale with a twist: Earth has become a battleground for two warring alien races to whom humans are of little consequence — their war has been going on for generations, and Earth is merely the location of the latest in a series of conflicts between the two species. Given what I’ve seen of the concept art so far, I have no doubt that the visual effects work will be stunning, which is really no surprise given the caliber of the previous work that the people at ‘Atmosphere Visual Effects’and ‘Darkroom Digital’have done. Yet the heart of the show really does lie with the characters: the state of Earth will serve as a backdrop — albeit a very cool one — to their story and journey.

The motley band of survivors on whom the story will focus is led by a woman named Sonya, played by the talented Jennifer Spence. Given Jen’s level of trust for both Mark and Ken, she actually 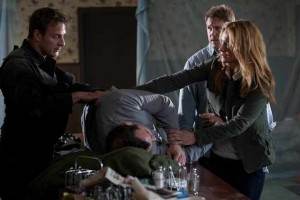 agreed to be involved in Echoes without even having read the script. Mike Dopud, playing a soldier named Nolan, actually got involved with the project following a Superbowl bet with Mark Savela, and he had nothing but the highest praise for the project and the men at the helm. It was actually through Mike that two of the other cast members, Victoria Pratt and Lochlyn Munro, joined Echoes — all three of whom flew up from LA to shoot the pilot in Vancouver. Jarod Joseph, an up-and-coming local talent, joined the cast after a meeting with Ken and Mark convinced them that he was perfect for the role.

Although the set of Echoes was my first time getting a behind-the-scenes look at the process of filming a show, it was immediately apparent to me what a well-oiled machine the cast and crew were. Not only that, but how much they all genuinely seemed to enjoy the work they were doing and the people they were doing it with. Even though not all of them were Stargate alumni, most of the people who were working that weekend were friends of friends, and the set had quite the familial feel. I’m hardly an expert, but I’d hazard a guess that that’s part of the reason that the raw footage I’ve seen so far looks so fantastic. Not to mention the fact that it was a supremely talented and experienced group of people working that weekend. 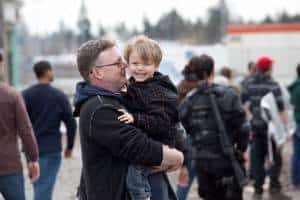 The group producing Echoes — Mark Savela, Ken Kabatoff, Andrew Karr, and Craig VandenBiggelaar — have taken somewhat of an unusual approach. Usually filming of a pilot is undertaken after a

network decides to give someone the go-ahead on a script; after the pilot is then filmed, if the network likes it, they have the option to ‘pick up’the show for a full, or half, season. These guys have taken another route: in the hopes of presenting an even stronger pitch, they spent two full days shooting, on a very minimal budget, highlights from the script. I’ll say this: if they can accomplish this level of production with two days and a bare-bones crew, imagine what could be done with the backing of a network.

I just want to take a moment to give a huge thank you to the cast and crew who all were incredibly welcoming and friendly, and were all more than happy to answer my questions when I was curious about the process. There really are too many people to name everyone individually here, but special thanks to Mark Savela, Ken Kabatoff, Andrew Karr, Craig VandenBiggelaar, Will Waring, Michael Blundell, Alex Pappas, Jennifer Spence, Mike Dopud, Victoria Pratt, Lochlyn Munro, Jarod Joseph, and James Bamford.

In the next little while I hope to write up some more articles on Echoes focusing on various aspects of the production, as well as some details behind the inception of this story. If you have any questions about the project or production process, or for the cast, writers, and producers, feel free to leave them in the comments below!

I find myself hoping that some smart network sees the potential in this pilot and decides to turn it into a series. Not only because this is a great group of people who I would love to see succeed with this project, and I think it would make a fantastic series, but also because I personally want to follow the journey of these characters and find out where the story will take them.

All photography by Lawren Bancroft-Wilson