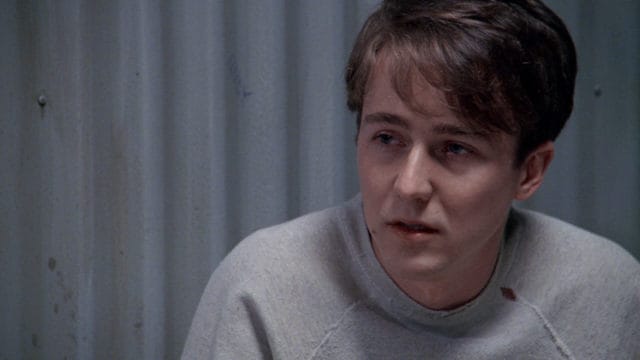 There are debut performances that are so incredible in some movies that they just blow everyone away. Edward Norton in Primal Fear is one of those that stands as one of the greatest debut performances ever for one reason, it was a raw and unfettered as it could be. If you know the story then you’d know that Norton plays an altar boy that brutally murders a well-respected Archbishop and is standing trial for it. The young man, Aaron, is completely out of his depth, has a stutter, and is not strong in any way that is easy to define. In other words he is the type that would shy away from just about anyone unless they were a proven friend and confidante. But his other half, a violent psychopath named Roy, has no such trouble and is the reason why Aaron is labeled as having dissociative identity disorder. Roy has no problem being violent and fully admits to killing the Archbishop and even gets violent in court when he’s being examined by the prosecutor that’s trying to get him convicted. When Roy makes his appearance however it becomes grounds for the case to be concluded quickly as Aaron is given a verdict of not guilty by reason of insanity.

Of course the twist is that when Martin goes to tell his client of the verdict he eventually discovers that the ‘lost time’ that Aaron continually suffers when Roy is present isn’t so lost. When Aaron tells him that he hopes that Mrs. Venable, the prosecuting attorney, is okay after what Roy did to her, Martin suddenly realizes that Aaron is fully aware of what goes on when Roy is out. It’s this realization that quickly opens his eyes to the fact that Aaron has been faking it the entire time, and that he knowingly murdered the Archbishop and then faked the entire idea of Roy. What’s even worst though is that he faked the entire idea of Aaron, meaning that Norton played a true and unrelenting psychopath that knew how to go to any lengths to get what he wanted and get away with it.

When you think about the actors he had to work with, Richard Gere, Laura Linney, Frances McDormand, and several others, you get the idea that Edward Norton was truly out of his element when he stepped into a role that so many had already been vying for. And yet despite all that he put in a performance that was not only great, but could be called one of the best he’s ever done. In fact to date the only other role that might be able to stand up to this is that of Derek in American History X, but even that pales a bit since this role took him to a limit that many people wouldn’t be able to pull off to save themselves. It might look like a simple little switch between Aaron and Roy, but keeping the two personalities different enough and set apart from one another would be an effort that a lot of people might be able to accomplish, especially when working with the equivalent of Hollywood royalty.

Many actors can probably remember their debut films but many upon many of them were quite horrible if you watch since just walking into the process of making a movie a lot of people don’t know what they’re doing, even if they’ve been to acting school and aced the program. That still doesn’t trump experience, which people need if they want to be truly great. Norton took this role to the limit in a way that’s not been matched in many a year. In fact there are only a few debuts that can be deemed as being close to Primal Fear when it comes to their level of mastery. The awkward stages that many actors go through on their road to fame is pretty obvious when you back and watch their first attempts. Only a handful ever seem to be truly on top of what they’re supposed to be doing, and of that handful only a few of them ever seem fit to blow people away.

On a personal note, here’s the one and only one instance in which I happen to believe that a movie debut came even close to matching that of Primal Fear. Matilda in Leon: The Professional, is simply great since she’s still a kid and therefore she gets to act like a kid. She acts like a hardened youngster that’s been through a lot, but she still has vulnerabilities that many children come with, and plays that to a tee. Natalie Portman knew how to act tough, how to stand her ground, and how to interact with the likes of Gary Oldman and Jean Reno, but she also knew how to act in a manner that was far easier to believe when it came to just being a kid.

Despite that Edward Norton still has her beat, but only by a thin margin.