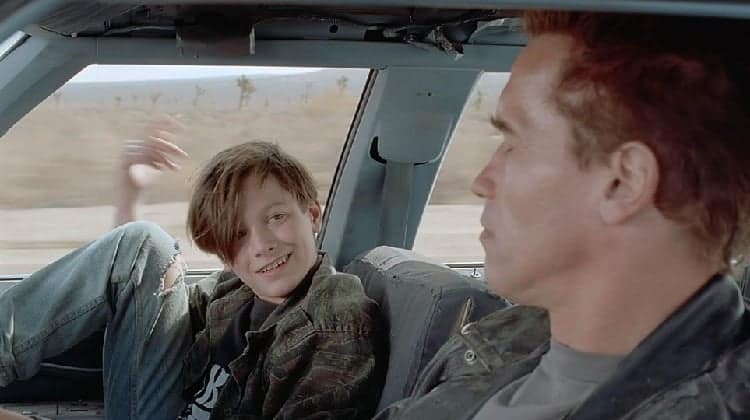 Let’s face facts, there just can’t be a Terminator movie without a few key characters, and John Connor is one of them. He’s been played by a few different people over the years, including Nick Stahl, Christian Bale, and Jason Clark, but Edward Furlong is the one that a lot of people tended to connect with the most for a couple of reasons. For one, he was still a young man when he starred in T2: Judgment Day, and had a lot more personality to him than the adults did, and the time period was a lot different as well. The curse of being John Connor didn’t really do anyone any good since from the moment Edward showed up in T2 he was really the only guy that seemed capable of bringing the kind of attitude to the role that people really connected with. That could be why he’s still the perfect guy for the job. While it’s been revealed that he’s going to be in the movie however, Cheryl Eddy of Gizmodo hasn’t really been able to nail down how big of an influence he’ll be in the movie.

Some folks might already know this, but since Randall Coburn of the AV Club has said it as well, Dark Fate is going to be a direct sequel to T2. The last three movies are being essentially scrapped as far as the continuity goes, a fact that is no doubt going to make a lot of people happy considering that fans haven’t been too pleased with the course of the story since the third movie came out. Rise of the Machines was kind of the fall of the Terminator franchise since by Genisys things had really come off the rails, with Stahl, Bale, and finally Clark really messing with the whole idea of who John Connor was. Bringing Furlong back only makes sense at this point since he really did the character justice and might be able to reprise the role in the same manner. Much like Linda Hamilton though he’s probably going to have to channel some very dark feelings to get into the right mindset since the story has still changed in ways that we can’t fully understand yet.

Judgment day is still happening obviously, otherwise Skynet wouldn’t be able to keep sending Terminators back and the Resistance wouldn’t be trying to counter their efforts. But as you might suspect the Terminator’s are getting more high-tech and more impressive since now it would appear that the enemy robots can replicate themselves by using whatever will work that might be at hand. And of course they can withstand small arms fire and possibly even heavier calibers, but it would also appear that explosions will rock them just as they did the T-1000, though the kind of durability that the new enemy might have is hard to gauge from a trailer. What’s also amusing is that there’s a great deal of animosity between Sarah Connor and the terminator that’s now named “Carl”, leading us to believe that she’ll happily waste him when all is said and done. To think that judgment day is still coming is kind of like seeing a hurricane coming from miles off and knowing that no matter what happens it’s still going to hit with murderous force. This time around however instead of going after John Connor the machines are targeting a young woman that seems to be the new key to winning the war. Perhaps the John Connor of the future has finally found a way to shut Skynet down, or maybe he’s dead and this young woman’s future child is the new savior.

It’s hard to say really but it’s going to be a wild ride getting there since the idea is that instead being dead from illness as she was in Rise of the Machines, Sarah Connor is very much alive and more than ready to tear things up yet again. But that does seem to leave the question of how “Carl” is there and why he’s no longer programmed to kill her or John. Oh there are so many questions at this point, but the answers are thankfully going to be coming in November. Hopefully this movie will pick up right where we need it to and show us the kind of visuals and story line that Terminator fans have been craving since T2 hit the scene. It was a revolutionary moment when the T-1000 came along, but something seems to indicate that the new terminator is going to be even more dangerous and more versatile since Skynet never seems to lack for any surprises when they’re really needed. It’d be nice to keep some of the elements of the other movies, but it doesn’t seem all that likely to happen. Oh well, at least we’re getting back to the continuity so many of us enjoyed.