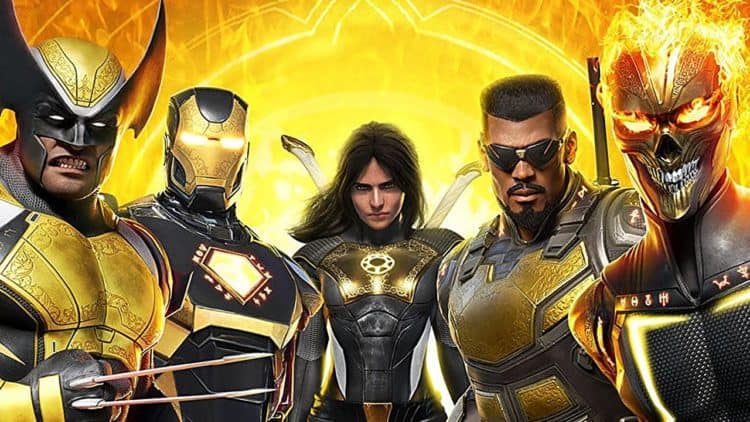 Midnight Suns is an upcoming tactical role-playing game developed by Firaxis Games that brings together the Marvel Universe for a brand new adventure. In this brand new story “Marvel’s Midnight Suns is a new tactical RPG set in the darker side of the Marvel Universe, putting you face-to-face against demonic forces of the underworld as you team up with and live among the Midnight Suns, Earth’s last line of defense.”. You get to play as the Hunter which is a player created character with over 40 different abilities to choose from. The game follows the Rise of the Midnight Suns comic book storyline but will not be an exact retelling. So far we know that the Hunter will be a child of the main antagonist, Lilith. Gameplay wise we expect to see something similar to XCOM since it is Firaxis Games. Firaxis has also already announced all the playable characters. These will include:

With the game still being a relatively new announcement, there’s no word on whether there will be DLC heroes or if the DLC will come as just more missions. But incase we do get some new DLC heroes we figured we’d think of a few heroes we feel would be a great fit for this storyline. The Marvel universe is massive, so when thinking about what characters we’d want added we took how well they would fit this narrative and how they would play in this type of gamestyle. So here are eight characters we’d like to see in Marvel’s Midnight Suns.

Scarlett Witch would be a great fit for the world of the Midnight Suns due to her abilities as a mage. As a playable character she would be able to use her mystic abilities to bend the battlefield to allow her companions to gain better vantage points. We believe she would function better as a support character. As an offensive character her abilities wouldn’t make much sense in a tactical style game. To better understand her abilities here is how Marvel phrases it,” Due to exposure to mystic energies and forces at an early age, Wanda may reshape reality to various extremes. Known as a “hex” in her formative years as an Avenger, the Scarlet Witch believed she used the ability to affect probabilities for a positive benefit to herself, though at times to imprecise outcomes. Later, she mastered the ability and began to understand it as a literal altering of reality.”.

We’d love to see Black Panther in any shape or form and seeing how Firaxis would portray his Midnight Suns costume is enough to vouch for him here. We’d love to see his abilities based on his swiftness and strenght. He could be an offensive characters that leaves his mark then stealthy makes his way to safety. Black Panther is also known for making use of his gadgets so we would love to see Firaxis have some fun with this concept and give Black Panther some truly innovative gadgets. Black Panther is also known because he, “wields enhanced strength and senses thanks to special heart-shaped herbs reserved solely for the post. The suit, which has changed in a variety of ways over the years, also features Vibranium enhancements that absorb impact, making him less susceptible to physical blows or gunshots. More concentrated Vibranium pads in the feet and hands allow for easier climbing.”

Who doesn’t love a hot head? It’s been a while since we’ve seen Human Torch really blow us away so we’d love to see him get a shot in Midnight Suns. Due to the nature of his abilities he could function as a ranged characters and use his flames to subdue enemies from a distance. We’d also love to see some sort of limiter where he can only be in his flame state for a certain amount of turns before having to retreat to safety. Could be an interesting concept. Johnny Storm also has some variety in the way he can release his flames. Marvel states that “His flames can also be flung or shot outwardly from his body in different ways, such as short contained bursts, streams, sheets, and ropes. The Torch may even fly by manipulating his flames to launch himself and become lighter than air. These powers arrive through mental concentration so if Storm becomes unconscious the flames will disappear. Likewise, if he’s exposed to water and other liquids or robbed of oxygen in his immediate area, he cannot maintain his fire.” so it would be interesting to see Firaxis take advantage of this.

Elektra just feels right for the world of the Midnight Suns. Her aesthetic and demeanor feel like they would fit perfectly into the world. Her abilities would allow her to be an offensive force that could get the jump on enemies. We imagine that with her twin blades she would be able to leave lasting bleeding effects on her enemies if that could prove to be deadly. And we really mean it when we say her aesthetic fits the Midnight Suns. We need to see her in the black and gold threads that adorn all the heroes in this story. Marvel describes her skills as “Elektra possesses levels of strength, speed, agility, reflexes, stamina, etc., that are at the pinnacle of human performance. She is an expert in Ninjutsu and various other martial arts, as well as gymnastics. She has also mastered the skills of the ancient ninja warriors of Japan. Her abilities border on the super human. Elektra can control her own autonomic nervous system to a degree, enabling her to control bleeding and fight infections, among other things. She can keep to the shadows and move with enough speed to remain unseen even in broad daylight.” so we would love to see her ability to control bleeding to be a larger part of her ability pool.

This a character that we’d like to see maybe as a fun DLC side mission. One where he is the star and it isn’t really cannon. For one we can’t really see how Deadpool’s antics would handle in the world of Midnight Suns since it seems that Marvel is going for a more serious toned story with this one. We’d love a side story of him retelling some of the events in the story but through his eyes. His fighting style would be a perfect fit for the gameplay due to him being able to use ranged weaponry and close combat. And his costume would also be something worth seeing. He describes his abilities for himself. From his words “Let’s be honest, my greatest super powers are wit and charm. But if you want a more literal interpretation of my superhuman abilities, I have a healing factor, which allows me to recover from grave injuries by regenerating entire body parts. I’m also an expert marksman and hand-to-hand combatant. It’s true—I’m basically a ninja. And I speak a bunch of languages, like Japanese, German, and Spanish, but most of the time I pretend I don’t. Danke schön.”

I feel like Gambit has sort of taken a back seat in the mutant world. He was very prominent in the movies and I have yet to see him pop up on any other form of media besides comics. I would love to see how he we be reimagined for Midnight Suns. He would be a perfect fit for the world of Midnight Suns because of his grudgy nature and his abilities. His abilities as told by Marvel, “Remy wandered the world as he plied his skills as a master thief, aided by his mutant power to charge objects with explosive energy. He employed playing cards he charged with kinetic energy as his trademark weapon. At one point Remy had approached the master geneticist Mr. Sinister for help in controlling his powers.” So it would be a great ability in a tactical game. Set up traps for enemies and blow up their weaponry. It’s something we would love to see and we feel could really happen.

We have Doctor Strange so why not add another super human brain to the mix to counter him? Reed Richards, Mr. Fantastic, would be a great choice for Midnight Suns due to having a very unique ability. He would be a ranged combat fight which would put him in a class of his own. Not to mention that it would be great to see Mr. Fantastic in something other than blue. Marvel has given us a rundown of his abilities which “Altered by cosmic rays, Reed Richards’s entire body can stretch and expand in multiple ways, as well as condense and compact. He may form various shapes with it, as well as become ultra-thin and ultra-dense, the latter helping him to use his fists, for example, as battering rams and the like. On some occasions, Richards has contained explosive material with his body by stretching himself around it and even altered his features to disguise himself as a different person. All of these features of his abilities create stress on his body and the greater the lengths he stretches to, the more it takes its toll.”

Moon Knight just makes sense for Midnight Suns. Midnight Suns almost seems like a knights of the roundtable sort of world. So adding a caped crusader to the mix would only be right. We’d love to see Moon Knight, who is usually decked out in all white, sporting a black and gold outfit. He’d most likely be an offensive character because of his combat capabilities. His abilities are a little complicated but Marvel describes them as “Marc Spector’s CIA career and mercenary work added to his boxing skills to endow him with not only strength and endurance, but also with a high degree of tactical and strategic skills, as well as combat and weapons expertise. Beyond boxing, he knows several martial arts, is a talented athlete and gymnast, and can speak several languages. Unfortunately, these abilities are balanced by an uneven mental state that manifests itself in bouts of depression and multiple identity disorder. Over his years as Moon Knight, Spector has also exhibited periodic demonstrations of supernatural powers such as enhanced strength during nights with full moons, prophetic visions and dreams, and the ability to drain another person’s life energies through physical contact.”