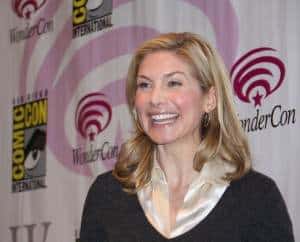 The passion and enthusiasm of Elizabeth Mitchell has not been exaggerated. She is a completely genuine human being, and when you speak with her about V, there is no doubt that she believes in her show as much as the dedicated fans around the world do.

At WonderCon in San Francisco last weekend, executive producer Scott Rosenbaum confirmed that while there is still no word about a third season for V, he shares the same high hopes that his co-stars Mitchell and Marc Singer do for a green light to pursue new and exciting avenues next season.

At a press roundtable following the V panel at WonderCon, Mitchell addressed the death of her character’s son Tyler in the Season 2 finale, as well as what might happen if they are granted a third season. ‘I really love Logan (Huffman) and enjoy working with him so much, so I’m sad that my son is dead.’When Erica finds out about Tyler’s death, ‘someone is going to have to physically stop her’from doing something rash. ‘And as we’ve seen with Erica, that might be hard.’ 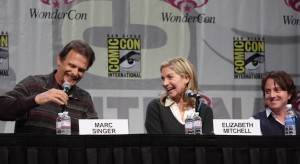 Mitchell also discussed the recent reveal of Project Aries, led by Marc Singer’s Lars Tremont. ‘Project Aries really started something completely new. I think having that power behind our tiny little group is really exciting; it gives them something to draw from. I mean, they’ve got nuclear weapons!’

When Mitchell revealed that there were several scenes cut from the season finale, including one where Erica finds out that Hobbes was partially responsible for her ex-husband’s death, we were pleasantly surprised. She also alluded to a scene where Jack makes a move on Erica, now that he is no longer a man of the cloth. ‘There’s a scene that they never showed, where Father Jack…moves in. And he gets really close, and she just looks at him like, ‘˜Whoa! Ok…’We shot it, and it was really fun. There’s got to be something there. We had far more romantic tension scenes, but they were all cut, so they should be on the DVD.’

The bulk of our press roundtable interview with Elizabeth Mitchell is below for you to watch and enjoy, as she reveals which pilots have been sent her way, and which former Lost co-stars she’d love to work with again (hint: Juliet & Sawyer when they’re 80…). 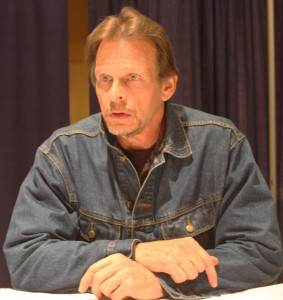 After spending time with Mitchell, Singer and Rosenbaum, all of whom are very sincere in their desire to continue this series together, V tops my list of shows on the renewal bubble to root for in every conceivable way. The Season 2 finale was their best episode to date, and the possibilities are endless to travel down unexpected paths and explore different relationships in Season 3.

If you would like to help ensure that V is renewed for a third season and to find information about where to send letters of support, I encourage you to visit and ‘like’ the Project Alice page on Facebook.